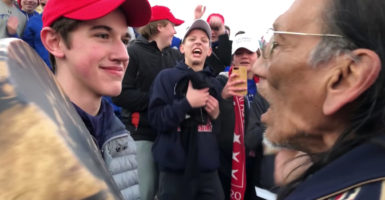 Kentucky teenager Nick Sandmann’s lawsuit against The Washington Post over its depiction of him and Covington Catholic High School is still fresh, but recent libel cases might offer guidance as to how this case might end.

Litigants have done quite well in recent high-profile libel cases, notwithstanding the high legal bar set in place by a 1964 Supreme Court ruling in New York Times v. Sullivan that requires proof of actual malice or reckless disregard of the truth if a public figure is suing.

A public figure is generally defined as a politician or government official or a celebrity who is consistently in the media. The legal bar is lower for a private individual to win a defamation case.

However, courts have also recognized a “limited purpose public figure.” This could be a normally private person who injects himself or herself into a public controversy. That hardly makes a libel case impossible, as recent cases show. Legal experts expect The Washington Post to argue that Sandmann’s involvement in a March for Life could fit into this category.

All cases have different circumstances, but here are three recent high-profile libel cases that might give an indication where Sandmann’s $250 million suit will go.

Two separate lawsuits emerged from an article in Rolling Stone magazine about a woman who claimed she was raped at a fraternity house at the University of Virginia. The story was published in 2014.

The article was based on the account of a female student—identified as “Jackie”—accusing the fraternity of a gang rape. But the account was later discredited when the magazine admitted it didn’t seek comment from seven men accused of the rape.

Nicole Eramo, a former associate dean at the university, sued for libel claiming the magazine portrayed her as indifferent to sexual assault victims.

A jury awarded Eramo $2 million from reporter Sabrina Rubin Erdely and $1 million from the magazine. This was on the basis that the reporter had reason for doubt. The jury determined the initial publication of the article lacked malice, but determined a clarification—which blamed the source for the story and did not retract reporting on the administrator—was a matter of malice.

The magazine appealed the ruling and in April 2017, the two parties settled the case out of court for an undisclosed amount.

“The actual malice standard does set a high bar for plaintiffs, but it is not insurmountable,” Mark Bailen, a media lawyer in Washington, told The Daily Signal.

“Juries on occasion find in favor of public figure plaintiffs, such as in the Rolling Stone case in Virginia,” he continued. “And appeals courts, including recently in North Carolina and South Carolina, have affirmed actual malice jury verdicts. The standard helps differentiate purposeful conduct that spreads a defamatory falsehood from mistakes that, if punished, would have a chilling effect on freedom of speech and the press.”

Months later, in June 2017, Rolling Stone also settled with the University of Virginia Alpha Chapter of Phi Kappa Psi fraternity, accused in the article of the gang rape, paying the fraternity $1.65 million. The fraternity initially sued for $25 million.

2. Andrew Breitbart and the Video Excerpt

In one major respect, a 2011 libel lawsuit by a U.S. Department of Agriculture employee against Andrew Breitbart had one key similarity to the current libel case against The Washington Post.

The complaint by the family of Sandmann, 16, against The Washington Post, states that the newspaper ran seven stories in the span of three days. This was based on a short video excerpt that made the rounds on Twitter.

When the entire video was reviewed, it seemed to demonstrate that Sandmann was not harassing or bullying Native American activist Nathan Phillips.

In 2010, Breitbart reported on video in which USDA official Shirley Sherrod, an African-American, was speaking to the NAACP in Georgia and seemed to say she discriminated against a white farmer. However, in the entirety of the speech, she explained that she helped the farmer.

After the video post, the Obama administration fired Sherrod.

Sherrod sued Breitbart as an individual, and not the Breitbart media company. Breitbart died in 2012, but Sherrod continued the lawsuit against his estate.

The two parties settled the case in 2015, before it went to trial, for an undisclosed amount.

Sherrod’s lawsuit said the post kept her from sleeping and caused back pain, and damaged her “integrity, impartiality” and  made “it difficult (if not impossible) for her to continue her life’s work assisting poor farmers in rural areas,” the Associated Press reported.

J. Christian Adams, a former Justice Department lawyer and frequent legal commentator, was deposed in the lawsuit because of a conversation he had with Breitbart about the lawsuit.

“This was an attack by Shirley Sherrod on conservative media,” Adams told The Daily Signal. “As a legal argument, it was a pile of bunk that a publisher has an obligation to air an hour of a video and can’t air an excerpt.”

Asked if that applies to the Sandmann case against the Post, Adams said he didn’t know enough about the case.

Lawyers for Breitbart argued the post was an opinion and not defamation.

After the settlement, the two parties released an amiable joint statement that explained the post was corrected, and it was not the intent that Sherrod would lose her job, but acknowledged the post played a role in the firing.

ABC News settled with a South Dakota-based meat producer Beef Products Inc. for more than $177 million in 2017. The company sued for libel in 2012.

The settlement was reached several days into the trial.

The company sued ABC News in a defamation lawsuit after ABC reported the beef had “pink slime” in the meat.

The company alleged in the complaint that ABC’s coverage of its lean beef product misled consumers into thinking the product was unsafe to eat and that it wasn’t really beef.

ABC reported the product was in 70 percent of the ground beef sold in grocery stores—and wasn’t properly labeled as such, the Associated Press reported.