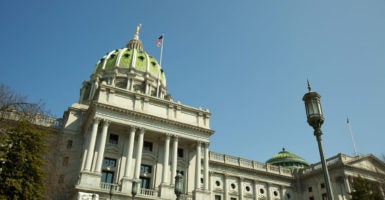 The Pennsylvania Human Relations Commission announced in August it is reinterpreting "sex" in state nondiscrimination law to include sexual orientation and gender identity. (Photo: billnoll/Getty Images)

A Pennsylvania agency has made an end run around citizens to impose gender ideology.

The commission circumvented the state Legislature, which never added categories like sexual orientation and gender identity into law, thereby circumventing voters as well.

This new policy could significantly curtail the First Amendment rights of citizens, as a similar policy has already done in Philadelphia.

But what does this change in policy mean for the average Pennsylvanian?

Look no further than what is happening to adoption agencies in Philadelphia.

Back in March, Philadelphia put out an urgent call for 300 families to provide foster care to help the flood of children coming into the system due to the opioid crisis. Just a few days later, the city halted the child placements of Catholic Social Services.

The reason? To investigate whether Catholic Social Services had violated the city’s Fair Practices Ordinance, a policy that prohibits discrimination on the basis of sexual orientation or gender identity—categories that the Pennsylvania Human Relations Commission now considers to be “built in” to the definition of sex in state anti-discrimination law.

Catholic Social Services, like many other religious adoption agencies, opts to place children in homes with both a mother and a father in accord with their religious convictions.

Now, the city is effectively shutting down Catholic Social Services for its beliefs about marriage and the family. As a result, several hundred children will be displaced and the city will have one less agency available to meet the dire needs of the city’s children.

In response to concerns that similar incidents of hostility toward religion might happen across the state, the Pennsylvania Human Relations Commission argued that citizens would have recourse to Pennsylvania’s Religious Freedom Protection Act.

Yet given the situation in Philadelphia, the commission should not be so confident that the religious rights of citizens will be respected by the government.

The agency shutdown in Philadelphia gets at the heart of why expanding anti-discrimination law to include categories like sexual orientation and gender identity so often poses a threat to citizens’ First Amendment rights. Oftentimes, these laws conflate disagreements over sexuality and marriage with discrimination, and stigmatize traditional beliefs as bigoted.

The Pennsylvania Human Relations Commission committed this very fallacy when it responded to the concerns of citizens who were concerned about free exercise.

The commission described their concerns thus: “Commenters who believe their religion gives them the right to discriminate against LGBTQ individuals and/or believe businesses should be able to discriminate in hiring and service based on the owner’s religious beliefs.”

The very phrasing of this text presumes that what is at stake in these conflicts is a “right to discriminate.”

However, as Justice Anthony Kennedy wrote in the majority opinion for Obergefell v. Hodges, many people who uphold the traditional view of marriage do so “based on decent and honorable religious or philosophical premises.”

Not every disagreement over controversial issues like marriage and gender identity is discrimination. In most of these disputes, at stake is citizens’ First Amendment right not to be compelled to communicate messages that violate their religious or moral beliefs.

The commission is wrong to assume that religious concerns deal with a “right to discriminate.”

The commission is also wrong to assume the government will apply these laws in a neutral, unbiased manner. Look at what is happening to Jack Phillips, owner of Masterpiece Cakeshop in Lakewood, Colorado.

Phillips just scored a major win for religious liberty at the Supreme Court, which found that the Colorado Civil Rights Commission had shown manifest hostility toward his Christian beliefs about marriage when it ordered him to create custom cakes for same-sex weddings.

However, Phillips is now in court again, this time for declining to create a cake celebrating an individual’s gender transition.

“The state is doubling down on its hostility against my beliefs, even though that’s what the Supreme Court said they couldn’t do,” Phillips said. “It seems I’m the only person in the state of Colorado who can’t live out my beliefs.”

All of this controversy is entirely unnecessary. Anti-discrimination laws can and should be interpreted in a way that protects people from unfair discrimination on the basis of their identity. They should not be used instead as a weapon to target people for their beliefs.

That is what is happening to Catholic Charities and Phillips—and now might become a part of the political landscape across Pennsylvania.

This new guidance in Pennsylvania simultaneously undermines the role of state legislators by robbing them of the power to legislate on such matters and threatens the rights of average Pennsylvanians.

Lawmakers should continue to oppose the legislative counterparts to this new guidance—House Bill 1410 and Senate Bill 613—and citizens should make their voices heard when it comes to the dangers of this kind of policy.

Until formal changes can take place, the commission should maintain the distinction between disagreements and discrimination when applying state anti-discrimination law.

Pennsylvanians must remain free to disagree on controversial topics like marriage and human sexuality. It is the responsibility of the Pennsylvania Human Relations Commission to respect that freedom.