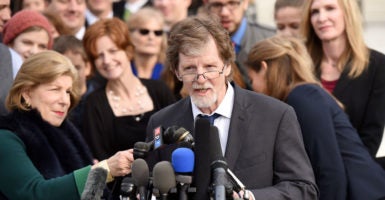 Jack Phillips, the owner of Masterpiece Cakeshop, was targeted a second time by the Colorado Civil Rights Commission, less than two months after his Supreme Court victory. (Photo: Douliery Olivier/ABACA/Newscom)

Jack Phillips owns Masterpiece Cakeshop in Lakewood, Colorado, and is himself a master baker. He’s in trouble with the state of Colorado for declining to create a custom cake for an event because doing so would violate his religious beliefs.

If that sounds familiar, it’s because Phillips has already taken a similar case all the way to the U.S. Supreme Court, which ruled in his favor on June 4.

In 2012, Phillips declined the request by a same-sex couple marrying in Massachusetts that he create a custom cake for their reception in Colorado.

The Colorado Civil Rights Commission, in a ruling affirmed by the state courts, concluded that Phillips violated a state law prohibiting discrimination on the basis of sexual orientation in businesses and other places of public accommodation.

The case, as the Supreme Court would describe it, presented a conflict between the government’s authority to protect individuals against discrimination and “the right of all persons to exercise fundamental freedoms under the First Amendment.”

This conflict is recurring, in different settings, more and more often.

To understand this conflict properly requires focusing on the reason that Phillips declined to make this particular cake. He has no desire to discriminate against LGBTQ people; in fact, his shop welcomes everyone as customers, regardless of their sexual orientation.

Instead, he claimed only that being required to use his personal skills to create a custom cake for a same-sex wedding forced him to have a role in that event in violation of his religious beliefs.

Advocates wanted the Supreme Court to announce a rule that would tip the scales in these cases. One side wanted the court to say that the Constitution guarantees a win for religious business owners. The other side wanted the justices to say that state anti-discrimination laws always prevail, even in these narrow circumstances.

Courts in general, and the Supreme Court in particular, often prefer not to push the legal envelope very far, especially when volatile issues are involved. Here, the Supreme Court decided in Phillips’ favor without establishing an across-the-board rule.

Instead of focusing on the Colorado Civil Rights Commission’s actual decision against Phillips, the high court focused on how the commission reached that decision.

>>> Related: Baker Hopes to Create ‘Without Fear of Punishment From Government’

There was clear—even shocking—evidence that commission members exhibited “clear and impermissible hostility toward the sincere religious beliefs that motivated [Phillips’] objection,” the court said.

Overt statements by commissioners, as well as treating Phillips’ objection differently than similar objections in other cases, were “inconsistent with the First Amendment’s guarantee that our laws be applied in a manner that is neutral toward religion.”

This was a significant decision for several reasons. First, it recognized that conflicts like this involve a person’s “sincere religious beliefs.” Second, it reaffirmed that the right of each individual to exercise religion is a fundamental constitutional right. Third, it exposed ugly, anti-religious bias by a government agency and held that the First Amendment guarantees freedom from such bias.

Since the Supreme Court did not settle this conflict once and for all with an all-encompassing rule, additional cases will help fill in the blanks and, hopefully, pave the way to more robust protection for the exercise of religion.

In June 2017, a lawyer named Autumn Scardina asked Phillips to create a custom cake celebrating his transition from male to female. When Phillips declined, on the same grounds as he had before, Scardina filed a discrimination complaint.

Rather than wait for the entire process to play out, however, Phillips took the initiative and filed a federal lawsuit.

Assisted by the Alliance Defending Freedom, Phillips’ lawsuit makes four legal claims. First, he alleges that the government violated his First Amendment right to exercise his religion by targeting, showing hostility toward, and discriminating against him based on his religious beliefs and practices.

That’s the most important issue, and it picks up where Phillips’ first case left off. While his first case involved specific acts of anti-religious hostility by individual persons, Phillips is alleging that the government is hostile to religion in a more general way.

Second, he alleges that the government violated his First Amendment right to free speech by forcing him to “create and disseminate expression that violates [his] religious beliefs.”

Third, he contends that the government violated his 14th Amendment right to due process by the “unfair and biased” way that it enforced the law against him.

And fourth, he argues that the government violated his 14th Amendment right to equal protection by treating his religiously motivated decision differently than those of others.

When Phillips declined to participate in an event that would violate his personal religious beliefs, he was not discriminating against the couple.

There is no reason that the Constitution’s protection for individuals who wish to live their faith and laws prohibiting discrimination against groups of people in the marketplace cannot coexist.

Those who regularly defend religious freedom know that this is a marathon, not a sprint. Each case that exposes government hostility toward religious belief and practice challenges us to take our individual rights more seriously.