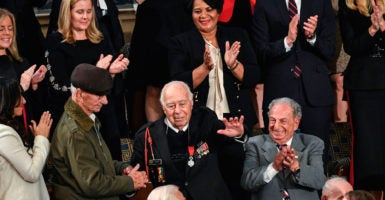 During his State of the Union speech, President Donald Trump honored the service of three veterans who served in World War II.

“On D-Day, June 6, 1944, 15,000 young American men jumped from the sky, and 60,000 more stormed in from the sea, to save our civilization from tyranny,” said Trump. “Here with us tonight are three of those heroes: Private First Class Joseph Reilly, Staff Sergeant Irving Locker, and Sergeant Herman Zeitchik. Gentlemen, we salute you.”

The three men were roundly applauded.

Trump went on to discuss economic accomplishments in the economy, a historical increase in the number of women employed, and prison reform initiatives, but toward the end of his speech, he mentioned the World War II veterans again.

“There is more to Herman’s story,” Trump said. “A year after he stormed the beaches of Normandy, Herman was one of those American soldiers who helped liberate Dachau.”

Opened in 1933, Dachau, located in southern Germany, was the first Nazi concentration camp that was intended to hold political prisoners. The concentration camp was liberated on April 29, 1945, when the U.S. Army came. According to the United States Holocaust Memorial Museum, American soldiers liberated “approximately 32,000 prisoners at Dachau.”

Another guest at the State of the Union, Joshua Kaufman, was a Holocaust survivor who was a prisoner at Dachau.

“He remembers watching through a hole in the wall of a cattle car as American soldiers rolled in with tanks. ‘To me,’ Joshua recalls, ‘the American soldiers were proof that God exists, and they came down from the sky,’” said the president.

Herman, said Trump, “was one of the Americans who helped rescue Joshua from that hell on earth.”

“Almost 75 years later, Herman and Joshua are both together in the gallery tonight—seated side by side, here in the home of American freedom. Herman and Joshua, your presence this evening honors and uplifts our entire nation.”

Speaking of the soldiers who were part of D-Day, Trump said:

Everything that has come since—our triumph over communism, our giant leaps of science and discovery, our unrivaled progress toward equality and justice—all of it is possible thanks to the blood and tears and courage and vision of the Americans who came before.