Fixing the VA for Our Veterans: What Will Trump’s Pick Need to Do? 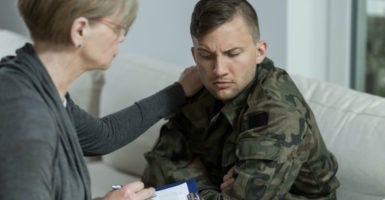 Corruption and a lack of accountability have plagued the Department of Veterans Affairs for years, resulting in poor health care delivery for U.S. veterans. (Photo: iStock Photos)

It’s official: President-elect Donald Trump has selected David Shulkin, the Department of Veterans Affairs undersecretary for health, to be the next VA secretary.

Shulkin, who has been undersecretary since July 2015, faces substantial challenges in reforming the troubled agency and restoring it to its mission of providing timely care and benefits to veterans nationwide.

The scandals brought to light at the Phoenix VA hospital nearly three years ago made clear to all Americans what thousands of veterans across the country have been saying for much longer—the VA has in many cases failed to keep its promise to care for and support veterans after they hang up the uniform.

These scandals are the result of numerous factors that Shulkin must commit to addressing as VA secretary.

For one, the Department of Veterans Affairs has succumbed to bureaucratic inefficiency and union control.

More than 200,000 VA employees belong to the American Federation of Government Employees or other unions. These unions have fought tooth and nail to defeat any reforms that would provide accountability for employees who fail to do their jobs, or worse, cause bodily harm or financial hardship to veterans and their families.

Just how bad have things gotten? In June, the VA informed Congress it would no longer enforce a 2014 law that would make it easier to fire bad VA employees—a law that only applied to the most senior VA employees, who make up just a very small percentage of the VA’s workforce, to begin with.

This lack of meaningful accountability has emboldened entrenched union employees, who know they will not—and in many cases legally cannot—be held accountable for providing substandard care.

While the vast majority of VA employees are honorable people committed to helping veterans, we have seen far too many instances of bad apples who proved detrimental, and in some cases deadly, to veterans.

This dearth of accountability has also led to massive financial waste at the department. Since 2009, the VA’s budget has increased nearly 86 percent—from about $97 billion in 2009 to a request for $182 billion for fiscal year 2017.

However, the VA’s own data show that budget increases, as well as $16 billion in emergency funds in 2014, have not led to more timely care for veterans.

In October 2014, shortly after the scandal broke, more than 350,000 VA medical appointments were taking longer than a month to complete. As of Dec. 22, 2016, that number was 519,533. The number of appointments taking more than four months to complete (48,252) is the highest it has been since the VA started tracking the numbers.

Meanwhile, from 2012-2015, the VA was spending more than $1 billion on office furniture, gardening, and interior decorating services.

It is disheartening that so many of my brothers and sisters in uniform, especially those with whom I served directly, will have so much difficulty providing care for themselves and their families simply because career government employees and entrenched special interests are more interested in job security and business as usual than keeping our nation’s promise to our service members.

Shulkin has the chance to change that possible future (and current reality) for millions of veterans. He brings to the table a distinguished medical career, an understanding of health care, and a love for veterans—qualities essential in the next VA secretary.

However, he must also demonstrate that he understands the unique challenges today’s veterans face, that he is committed to resolving the problems currently plaguing VA, and that he will fight the entrenched interests who currently exert their control over veterans’ health care choices.

The VA can and should play a central role in helping connect veterans with the care and resources they need after they leave the service, but like so much of Washington, it has been diverted over time from its original, honorable purpose.

The Trump campaign rightly made veterans’ issues a core pillar of its platform. Now, the administration, Shulkin, and the team he assembles must commit anew to fighting for our veterans.

It is a fight we must wage. And win.

Views expressed in this piece are John Cooper’s alone and do not necessarily represent the views of The Heritage Foundation, his employer.