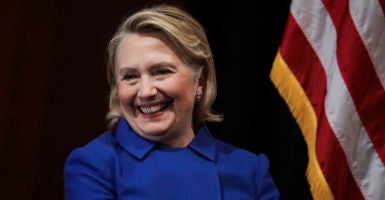 Federal bureaucrats, defying President Donald Trump, are resisting requests for information about Hillary Clinton’s use of a private email account while secretary of state and how that may have compromised national security, the head of a legal watchdog group told The Daily Signal in an interview.

But later, Fitton said, “President Trump’s appointees got in the way of us doing it.”

U.S. District Judge Royce C. Lamberth ruled Jan. 17 that Judicial Watch could begin the process of discovery in the Clinton email case. That means former Obama administration officials and Clinton aides must respond to questions from the organization under oath and in writing.

“Obviously, Mrs. Clinton’s conduct is an issue here, but we are also talking about the conduct of the Justice Department and the State Department,” Fitton said in the Jan. 31 phone interview with The Daily Signal, adding:

Obama administration officials who will be deposed under oath as a result of Lamberth’s order include Susan Rice, the former national security adviser who also served as ambassador to the United Nations; Ben Rhodes, a deputy national security adviser to Obama; Jacob Sullivan, Clinton’s former senior adviser and deputy chief of staff; and FBI official E.W. Priestap, who since 2015 has been assistant director of the agency’s Counterintelligence Division.

Remarkably, Fitton said, he has found that in some instances the Trump administration has been less responsive than the Obama administration to Freedom of Information Act requests pertaining to the Clinton emails and related questions about the Benghazi incident.

Ambassador Christopher Stevens and three other Americans died in the attacks on the consulate and a nearby CIA annex.

“The main scandal of the Trump administration isn’t Russia,” Fitton told The Daily Signal. “It’s the agencies’ continuing defense of Hillary Clinton’s misconduct, which is obviously contrary to the desires of the president, so it’s doubly scandalous. With some of these issues, we had an easier time with the Obama Department of Justice than we have had with the Trump Justice Department.”

“I think the president is very concerned that he is being ill served by the folks he’s appointing to these agencies, and that what they are doing is contrary to the public interest,” Fitton said.

While secretary of state under President Barack Obama from Jan. 21, 2009, to Jan. 31, 2013, Clinton used an unsecure, private computer server to send, receive, and store email that contained “top secret” and classified information, the FBI determined.

Judicial Watch, a Washington-based nonprofit that says it focuses on “integrity, transparency, and accountability in government,” first brought to light Clinton’s routine use of a private email account to conduct government business.

In 2014, Fitton’s organization filed a lawsuit under the Freedom of Information Act against the Obama administration, seeking information and correspondence pertaining to the Sept. 11, 2012, terrorist attack on the U.S. consulate in Benghazi, Libya. The suit led to the disclosure of Clinton’s nongovernment email account in 2015.

Judicial Watch has four months to conduct discovery in response to Lamberth’s order. According to a press release, the group’s lawyers will seek to find out whether:

—Clinton intentionally attempted to evade the Freedom of Information Act by using a nongovernment email system.

—The State Department’s efforts to settle the Clinton case beginning in late 2014 amounted to bad faith.

—The State Department adequately searched for records responsive to Judicial Watch’s request for documents under the Freedom of Information Act.

Lamberth will hold a hearing after discovery to determine whether it is necessary for Judicial Watch to depose additional witnesses, including Clinton and Cheryl Mills, her former chief of staff, the watchdog group says.

“I have little doubt that discovery is going to confirm that [the Freedom of Information Act] was a major issue in terms of the reason for Clinton’s email system being secret,” Fitton said, adding of Lamberth’s order:

Judicial Watch’s 2014 FOIA request sought copies of “any updates and/or talking points” given to Rice, then U.N. ambassador, “by the White House or any federal agency concerning, regarding, or related to the September 11, 2012 attack on the U.S. consulate in Benghazi, Libya.”

The watchdog also sought all “records or communications concerning, regarding, or relating to talking points or updates on the Benghazi attack” given to Rice by the White House or any federal agency.

While appearing on multiple Sunday news programs to discuss the attacks that occurred the previous Tuesday, Rice said the attacks were not premeditated and instead were the result of a spontaneous protest in response to an “anti-Islamic” video on the internet.

Clinton had declined to go on the Sunday shows. Judicial Watch has described the written talking points Rice used as the basis for her comments as “false.”

“They were giving us the runaround,” Fitton said of Obama State Department officials. “They knew they had them and didn’t want to turn them over to us. The court wants to know whether the Benghazi scandal was a reason for keeping these emails secret from and not subject to search by the State Department.”

In his Jan. 15 order, Lamberth explained why he rejected the State Department’s objections to allowing Judicial Watch to depose department officials with knowledge of the talking points on the Benghazi attacks:

Rice’s talking points and State’s understanding of the attack play an unavoidably central role in this case: information about the points’ development and content, as well as their discussion and dissemination before and after Rice’s appearances, could reveal unsearched, relevant records; State’s role in the points’ content and development could shed light on Clinton’s motives for shielding her emails from FOIA requesters or on State’s reluctance to search her emails.

The Daily Signal asked the press offices at the State Department and the Justice Department for comment on Lamberth’s discovery order and Fitton’s characterization that the agencies have resisted discovery in the Clinton email case. Neither department had responded as of publication time.

Another unanswered question for Judicial Watch dates to a lawsuit it filed in March 2017 against the Office of the Director of National Intelligence and the State Department. The suit sought to compel both agencies to conduct a “damage assessment” of how hostile foreign actors may have exploited Clinton’s unsecure email server.

“A big part of the scandal here is we don’t know how compromising Clinton’s use of private email was to national security, because the federal agencies responsible for securing our classified information have refused to investigate it,” Fitton told The Daily Signal. “They presume that foreign actors got her emails, but they’ve never done the required damage assessment of the leakage of classified information.”

On top of that, we have additional information suggesting that her emails were being copied in real time to another foreign actor like China. Still, no damage assessment has been done and we sued, and we were opposed. The Obama people didn’t want to do it and President Trump’s appointees got in the way of us doing it.

In a separate but related case, Clinton submitted written answers under oath in response to questions from Judicial Watch about her email system.

In that testimony, Clinton said she used the private email for the “purpose of convenience.”