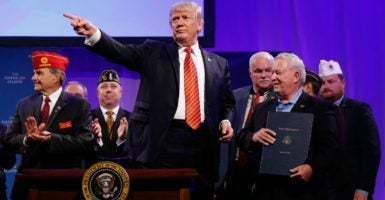 President Donald Trump spoke about patriotism and unity Wednesday, in addressing the American Legion’s 99th National Convention, before enacting another reform at the long-troubled Department of Veterans Affairs.

During his remarks, the president invited Medal of Honor recipient and Vietnam Navy veteran Donald E. Ballard to the stage for a few words.

“I believe we’ve elected the right leader to lead us out, to drain the swamp,” Ballard told a cheering audience in Reno, Nevada.

Trump joked, “That was very risky. I didn’t know what was going to happen.”

The president heralded veterans in the audience and around the country, and also called Veterans Affairs Secretary David Shulkin “a true reformer.”

“Every veteran here today is part of a long, unbroken chain of American heroes,” Trump said.

“You help keep history alive. History and culture, so important. You encourage the observance of patriotic holidays,” he continued. “You stress the need to enforce our laws, including our immigration laws. You teach the responsibilities of citizenship and the importance of the Pledge of Allegiance. You do it all, as your motto says, for God and country. That’s why we’re here today, for America and for God.”

Trump later added, “It is time to heal the wounds that divide us, and to seek a new unity based on the common values that unite us.”

After wrapping up his remarks, Trump signed the Veterans Appeals Improvement and Modernization Act, designed to expedite the appeals process in the Department of Veterans Affairs.

More than 470,000 veterans are still waiting for decisions regarding their appeals on disability compensations claims.

“No longer will veterans be kept waiting for years to get an answer to their appeals,” Trump said.

The legislation passed the House and Senate unanimously.

The new law breaks the appeals process down into three “lanes.”

Under the “Local Higher Level Review Lane,” a VA adjudicator reviews the same evidence considered by the original claims processor. Under the “New Evidence Lane,” a veteran could submit new evidence for review and have a hearing. Under the the “Board Lane,” jurisdiction for the appeal would transfer immediately to the Board of Veterans’ Appeals.

The law further gives the VA secretary authority to test the new system before implementing. It would allow veterans already in the appeals process to opt into the new system. The secretary will also have to present periodic reports to Congress regarding how many appeals are pending in the modernized system and in the legacy system.

Trump noted he previously signed several pro-veteran bills, including the Department of Veterans Affairs Accountability and Whistleblower Protection Act, into law. The law made it easier to fire bad VA employees, and provided added protections for VA employees who report wrongdoing in the agency. This legislation was in response to the 2014 VA waiting list scandal.

Trump invoked his famous line from “The Apprentice” TV show.

“If somebody who works at the VA is bad to the people of the VA, disrespectful, not treating our fellow patriots, we look at them and say, ‘You’re fired.’”