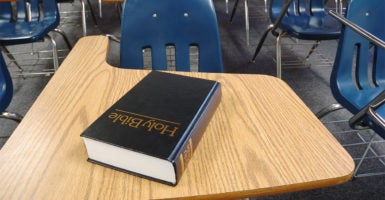 Among the states considering bringing the Bible back to public classrooms is Florida.

Earlier this year, state Rep. Kimberly Daniels, a Jacksonville Democrat with a background in Christian ministry, filed House Bill 195, titled “Study of the Bible and Religion.”

Under the bill, “specified courses relating to religion, Hebrew Scriptures, & [the] Bible” would be required offerings as electives in every school district for grades 9-12. Students would study religion “objectively,” including Hebrew Scripture, the Old Testament, the New Testament, and a course on all three.

Under the proposal, the courses would “follow all state and federal laws and guidelines in maintaining religious neutrality and accommodating the diverse religious views, traditions, and perspectives of all students in the school.” The bill also would permit “a brief meditation period.”

“God is positive,” Daniels said. “Our children need all that they can get to escape what’s going on in this generation, and in the world, and in our schools today.”

If Daniels’ Bible literacy bill passes, it would go into effect July 1.

Other states that have introduced similar bills this year include Indiana, Missouri, North Dakota, Virginia, and West Virginia, according to the American Civil Liberties Union, which is challenging these efforts.

In North Dakota, lawmakers proposed a bill to allow public high schools to offer a Bible studies class as an elective within its social studies curriculum. The ACLU deems it “unconstitutional,” arguing the bill needs to include other viewpoints.

“A school could teach comparative religious classes or you could talk about the Bible’s relationship to literature, art, or music,” Heather Smith, executive director of the ACLU chapter covering North Dakota, South Dakota, and Wyoming, told KVRR-TV. “It’s really difficult to do so in a constitutionally permissible manner, and those are really our issues with this bill.”

State Rep. Aaron McWilliams, R-Hillsboro, a co-sponsor of the bill, told Fox News that he would be in favor of including the Quran or any other religious text in an elective class from a historical and sociological perspective.

The ACLU used the same argument when targeting Bible literacy classes in Kentucky permitted by a 2017 bill signed into law by Gov. Matt Bevin, a Republican.

Last year, the ACLU said, Bible literacy bills were considered in Alabama, Iowa, and West Virginia, but none passed.