My Local School Board May Begin Silencing Parents Over Transgender Agenda 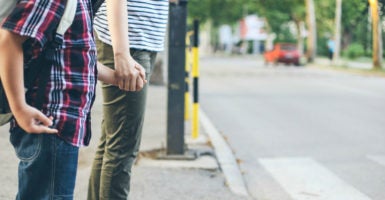 In 2015, the Fairfax County School Board voted to add "gender identity" to its nondiscrimination policy, provoking vocal opposition from a number of parents. (Photo: iStock Photos)

In Fairfax, 10 parents have just three minutes each to give their views to the county school board each meeting.

Earning one of these coveted slots is like buying concert tickets: You get up early on the Monday before the meeting and click frantically, hoping to be among the first 10 when the school board opens its sign-up line.

Since the school board imposed its gender identity politics on unwilling Fairfax families nearly two years ago, it has heard from dozens of angry parents. More come forward every month.

For school board members on the receiving end of the discourse, this must be getting old. But that’s the price of freedom, right?

Maybe not. Parents have learned that bureaucrats on the Fairfax County School Board have had just about enough of this free speech, and are meeting to discuss how best to curtail it.

This week, board member Ryan McElveen, chief proponent of the transgender policy, is calling a meeting to discuss the public speaker process. Nothing good can come from that.

Last month, a citizen speaking before the Fairfax County School Board made the charge that nonresidents frequently appear at school board meetings—meaning people who do not reside in Fairfax County. He was referring to some who voiced criticism of school board action.

But I wonder, do they also favor IDs for voting in Fairfax? Do you have to show proof of legal residency to receive school services? Those are good questions for the board, if I ever get the chance to ask them.

The gentleman who made the complaint claimed that Loudoun County residents were testifying in Fairfax County.

Perhaps he thought I was from Loudoun, since I testified before the Loudoun school board back in December. But I was speaking as a Fairfax County resident and as a sexual assault victim, to warn them that allowing men and boys into women’s and girls’ locker rooms, showers, and bathrooms is not only disrespectful, but dangerous.

Thankfully, Loudoun did not go the way of Fairfax.

I actually had to withdraw my daughter from her Fairfax County public elementary school over concerns for her personal safety and privacy. Her former school is currently allowing a biological boy to use the girls’ facilities, without any parental notification.

When Fairfax County School Board Chairman Sandy Evans says the transgender guidelines are “on hold,” she gives a false impression. The policy is being implemented right now, behind parents’ backs.

And now, a new speech policy against parents is being considered. This would affect parents who are not only constituents, but also the taxpayers who pay the school board’s salaries.

As a taxpayer, I am entitled to voice my concerns. I am a strong believer in giving both positive and negative feedback.

The Fairfax County School Board does not seem interested in listening to constituents who do not share their political views. When a single citizen makes the unfounded claim that non-Fairfax parents are speaking, McElveen shows deference and schedules a meeting to address it.

Yet when hundreds of parents and citizens with diverse cultural, religious, and ethnic backgrounds have gathered in one room to voice their concerns about adding “gender identity” to the so-called nondiscrimination policy, no meeting is ever called.

The school board hasn’t even shown us the courtesy and respect to acknowledge that we’ve been heard. All we’ve heard is their silence—and now they want to silence us?

The school board needs to develop some respect for parental input. Rather than shutting down citizens who would defend the privacy of their children, the Fairfax County School Board should make good on its commitment to openness, respect, and the democratic process.