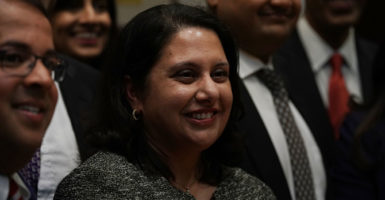 The administrator of the White House Office of Information and Regulatory Affairs, Neomi Rao, attends a White House event on Nov. 13. President Donald Trump renominated Rao to the seat vacated by now-Supreme Court Justice Brett Kavanaugh on the U.S. Court of Appeals for the D.C. Circuit. (Photo: Alex Wong/Getty Images)

President Donald Trump renominated 51 federal judges on Wednesday, including the replacement for now-Supreme Court Justice Brett Kavanaugh on the U.S. Court of Appeals for the D.C. Circuit and two nominees for the liberal 9th U.S. Circuit Court of Appeals.

The nominations are going back to the Senate after having been left over from the previous Congress. In many cases, Democrats in the minority used delaying tactics to hold up the nominations.

“I also appreciate the list of 51 impressive judicial nominations to fulfill the Senate’s constitutional role in advice and consent,” Graham added. “The committee will immediately begin working on these important nominations and trying to confirm as many as possible, as soon as possible.”

Nine of the nominees would serve on appeals courts. Most of the others will be on district courts and other lower courts.

The president renominated Neomi Rao, the administrator of the Office of Information and Regulatory Affairs, to serve on the Court of Appeals for the D.C. Circuit, the spot left vacant after Kavanaugh was confirmed to the Supreme Court in October.

The left has attacked Rao for writing conservative opinions while in college for the Yale Free Press student newspaper about affirmative action, LGBT issues, and other matters.

Trump likewise renominated Brian Buescher for U.S. district judge for the District of Nebraska. Some Democratic senators questioned him about his membership in a conservative Catholic organization, the Knights of Columbus.

The Republican-controlled Senate has confirmed 85 of Trump’s judicial nominations, including two for the Supreme Court, Kavanaugh and Neil Gorsuch.

However, Democrats have held up enough nominations that there are more judicial vacancies now than when Trump was inaugurated two years ago.

“There are now more vacancies than there were on Inauguration Day,” said Carrie Severino, chief counsel and policy director for the Judicial Crisis Network. “Time for Democrats to stop the bullying and obstruction, and confirm the judges.”