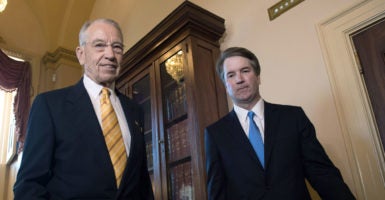 Hours after President Donald Trump announced his nomination of Judge Brett Kavanaugh to the Supreme Court, Senate Minority Leader Charles Schumer, D-N.Y., said: “The American people deserve to know what kind of a Justice President Trump’s nominee would be.”

He’s right—and the answer to that question is readily available in Kavanaugh’s record.

Each nominee has a unique record that covers their professional and personal activities. Common sense says that the position to which an individual has been nominated defines which parts of his record are most relevant. Kavanaugh is no different.

A previous post examined three speeches by Kavanaugh that focused specifically on how judges should approach deciding cases. This piece examines Kavanaugh’s first appearances before the Senate Judiciary Committee in connection with a judicial nomination.

President George W. Bush first nominated Kavanaugh to the U.S. Court of Appeals for the D.C. Circuit on July 25, 2003. The committee held a hearing for him on April 27, 2004, but put off his confirmation.

During both hearings, Senate Democrats pressed Kavanaugh about his knowledge of Bush’s criteria for judicial nominations and Kavanaugh’s time working with independent counsel Kenneth Starr. They also asked whether Kavanaugh was familiar with Bush-era anti-terror policies, a claim he repeatedly denied under oath.

While Schumer and others insisted that Kavanaugh was “too partisan,” the record of both hearings provides many insights into the kind of judge he would be.

Kavanaugh consistently emphasized, for example, deference to the law as written and his unwillingness to inject his personal policy preferences when ruling on the cases before him. He stated:

I believe very much in interpreting text as it is written and not seeking to impose one’s own personal policy preferences into the text of the document. I believe very much in judicial restraint, recognizing the primary policymaking role of the legislative branch in our constitutional democracy.

Kavanaugh not only embraced judicial restraint, but he was candid about the impact of judicial activism. He stated, for example, that “some of the worst moments in the Supreme Court’s history have been moments of judicial activism, like the Dred Scott case, like the Lochner case, where the court went outside its proper bounds, in my judgment, in interpreting clauses of the Constitution to impose its own policy views and to supplant the proper role of the legislative branch.”

While some senators tried to elicit Kavanaugh’s opinion about certain judicial precedents, Kavanaugh repeatedly declined the invitation in order to protect the impartiality of the judiciary. He explained at one point that a certain question “sounds like a specific hypothetical that could come before the court, so I’d hesitate to give an answer.”

Overall, Kavanaugh’s answers under rigorous questioning during his 2004 and 2006 confirmation hearings prove helpful in answering the question Schumer asked—namely, what kind of justice Kavanaugh will be.

Kavanaugh reiterated throughout both hearings that he will defer to the law as written, restrain himself from imposing his own personal policy preferences and taking on a partisan role, respect precedent, and maintain impartiality by refusing to prejudge cases before they come before the court.

If Kavanaugh’s own words aren’t enough, senators should consider the assessment of Judge Walter Stapleton of the U.S. Court of Appeals for the 3rd Circuit, for whom Kavanaugh clerked after graduating from Yale Law School:

There was no trace of arrogance and no agenda. [Kavanaugh] applied his legal acuity and common sense judgment with equal diligence to every case, large or small, undertaking his evaluation of each without predilection. … His ultimate recommendations were based on careful case-by-case analyses of the facts of each case, and objective application of the relevant precedents. It was clear to me that he understood the crucial role of precedent in a society that’s committed to the rule of law.