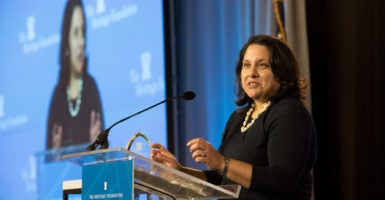 The left is condemning some of the college writings of Neomi Rao, nominated by President Donald Trump to succeed Brett Kavanaugh on the U.S. Court of Appeals for the District of Columbia Circuit. Rao recently received The Heritage Foundation's Distinguished Intern Alumni Award. (Photo: Erin Granzow for The Daily Signal)

Young conservatives, be warned: Reasonable ideas written in college—such as the notion that binge drinking can lead to dangerous consequences for young women—can and will be twisted and used against you should you be nominated for high-powered positions two and a half decades later.

That’s what’s happening to Neomi Rao, President Donald Trump’s nominee to replace Brett Kavanaugh on the U.S. Court of Appeals for the District of Columbia Circuit, and who reportedly is on the short list for the Supreme Court.

She is a brilliant legal scholar with decades of experience writing as a lawyer and law professor at George Mason University, but that’s now being overlooked because of some columns in college.

Her writings were published in the early 1990s, when Rao wrote for the Yale Free Press student newspaper as an open conservative at Yale University. She also briefly wrote for The Weekly Standard.

“'[S]he described race as a ‘hot, money-making issue,’ affirmative action as the ‘anointed dragon of liberal excess,’ welfare as being ‘for the indigent and lazy,’ and LGBT issues as part of ‘trendy’ political movements,” wrote BuzzFeed News. “On date rape, Rao wrote that if a woman ‘drinks to the point where she can no longer choose, well, getting to that point was part of her choice.’”

Reading Rao’s original work might take a significant amount of time, but the experience is worth it to see how easily a journalist with an agenda can cherry-pick the most provocative few words in a person’s long, thoughtful work.

Take the example of Rao’s 1994 op-ed in The Yale Herald, headlined “Shades of Gray,” where she did indeed write that if a woman “drinks to the point where she can no longer choose, well, getting to that point was part of her choice.”

Activist groups are twisting this line to suggest Rao believes it’s women’s fault when they get raped, but that’s not what she said at all.

Rao wrote firmly that men should be prosecuted and held responsible for rape—not once, but twice, in case the point wasn’t clear.

“A man who rapes a drunk girl should be prosecuted. At the same time, a good way to avoid a potential date rape is to stay reasonably sober,” she wrote.

Provocative, sure, but Rao’s being punished for predicting the sexual assault crisis that’s now exploded on college campuses, and for raising important questions we still haven’t solved. Do women hold any responsibility when they drink too much and consent to something they later regret? Rao concluded:

Clearly, if the male student forced the woman to have sex against her will, then he should be held responsible. Yet the role of alcohol severely complicates the scenario. People often drink precisely so that they may limit their responsibility. They want to forget about their papers and their problems. They want to have fun, and not think so hard.

Since the case rests only upon the testimony of the students who were involved, who decides the truth? A woman makes an accusation, a man denies it. At Yale, this gives the Executive Committee another opportunity to exercise their particular brand of judgment.

More than two decades later, the U.S. Department of Education is still asking these important questions, with Education Secretary Betsy DeVos most recently working to restore the rights of those accused.

But somehow, liberal media and activist groups find these ideas unacceptable for a college student in 1994 to explore.

One side says #BelieveAllWomen, while the other wants evidence and facts. In context Rao simply asks:

Can the liberated ’90s woman freely choose whether to drink or not? Unless someone made her drinks undetectably strong or forced them down her throat, a woman, like a man, decides when and how much to drink. And if she drinks to the point where she can no longer choose, well, getting to that point was part of her choice. Implying that a drunk woman has no control of her actions, but that a drunk man does, strips woman of all moral responsibility. It creates a culture of victimization in which men are prowling and uncontrollable, and women are weak and helpless. Any self-respecting person should be troubled and offended by such ideas.

Justice Department spokesperson Kerri Kupec responded to the inflammatory allegation, telling BuzzFeed News that Rao’s contributions to her student newspaper were “intentionally provocative,” which is any good writer’s job.

Rao’s arguments were reasoned and courageous. They demonstrate her ability to raise countercultural arguments and articulate their defense—an important quality in any good judge.

Instead of punishing Rao for addressing controversial topics on college campuses, society should be doing the opposite. We should praise her for having the courage to swim against the current because, right or wrong, college is the time to explore.

And instead of writing splashy headlines about the writings of a 19-year-old, we should look at Rao’s professional record and achievements since then.

After receiving a B.A. from Yale University and a law degree from the University of Chicago, Rao clerked for Supreme Court Justice Clarence Thomas. (A former intern at The Heritage Foundation, she recently received the think tank’s Distinguished Intern Alumni Award.)

She served in all three branches of government, then went on to found the Antonin Scalia Law School’s Center for the Study of the Administrative State at George Mason University.

Currently, Rao is serving as administrator of the Office of Information and Regulatory Affairs in the Office of Management and Budget, known as “the most important office you’ve never heard of.”

There, she oversees Trump’s ambitious deregulatory agenda. She’s respected by colleagues as a brilliant legal mind, and is considered one of the foremost experts in administrative law.

In other words, Rao is a force to be reckoned with in Washington and beyond. An Indian-American woman from Detroit, she’s an obvious threat to the those on the left.

If digging up old, provocative works from college is the worst they’ve got, Rao will sail through her confirmation hearings for the D.C. Circuit and eventually, possibly the Supreme Court.

But we learned from the Kavanaugh hearings that the left won’t stop at anything, so conservatives best come prepared. There’s no telling how low they’ll go.