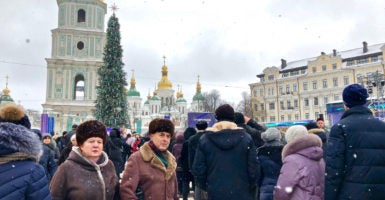 KYIV, Ukraine—Orthodox Christians celebrated Christmas on Jan. 7, according to the Julian calendar. This year’s holiday was the first for Ukraine’s newly unified, national Orthodox Church, independent from Russian control for the first time since the 17th century.

“Russia uses the church as one of the tools to influence Ukraine’s domestic politics,” said Julia Kazdobina, head of the Ukrainian Foundation for Security Studies.

“By establishing an independent Ukrainian church with support from the Ukrainian government, Ukraine has shown its resolve in defying one of the most potent institutions in Russia,” Kazdobina said. “This is a significant asymmetric blow in response to Russian aggression.”

Two breakaway Ukrainian churches formed in the 1990s following Ukraine’s independence from the Soviet Union, but the Constantinople Patriarchate, historically the most influential center of the global Orthodox Church, had never officially recognized the Ukrainian splinter churches as legitimate and independent from Moscow. 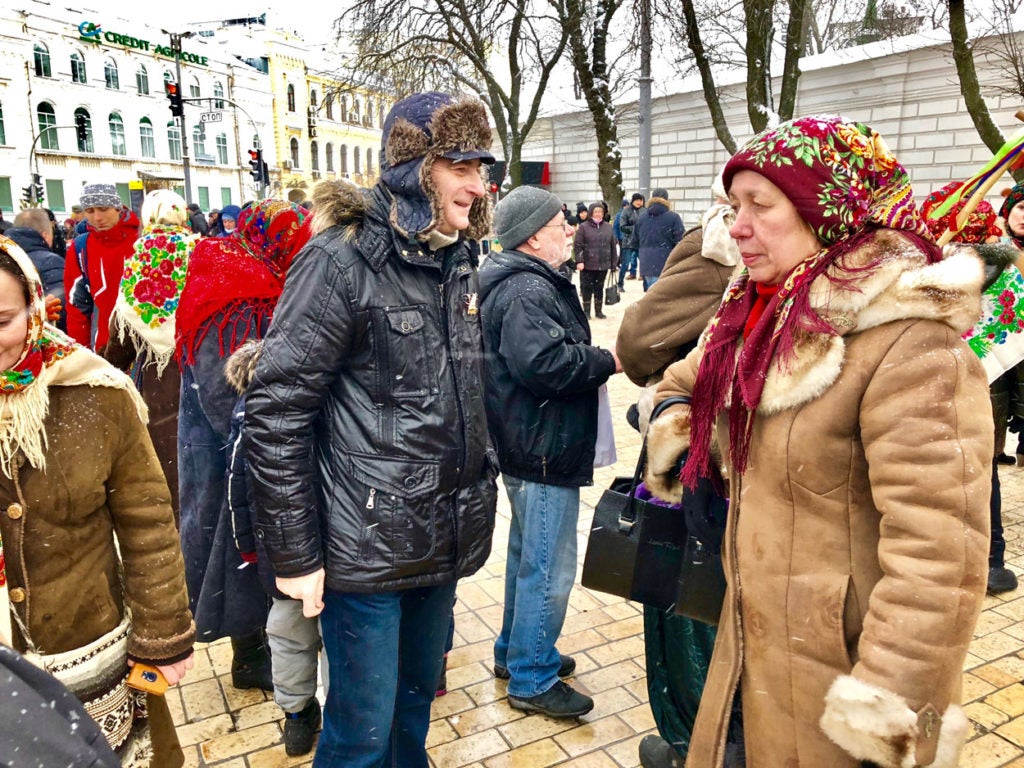 Outside of St. Sophia’s Cathedral in Kyiv on Jan. 7, which was Christmas, according to the Julian calendar. (Photos: Nolan Peterson/The Daily Signal)

During Sunday’s ceremony at St. George’s Cathedral in Istanbul, 39-year-old Metropolitan Epiphanius, who was elected leader of a unified Orthodox Church of Ukraine last month, accepted a document called the “tomos” of autocephaly from Bartholomew. Ukrainian President Petro Poroshenko attended the event, along with other political leaders.

“Together with the prayers of gratitude, we are also praying to God today for our Ukrainian people, who have been suffering for five years from the war brought from outside to our peaceful home,” Epiphanius said Sunday in Istanbul.

Back in Kyiv on Monday for Christmas, Epiphanius held a special service at the 11th-century St. Sophia’s Cathedral. The tomos document—a scroll ornately handwritten in Greek—was unrolled and on display, affixed to a wooden easel with blue and yellow ribbons (Ukraine’s national colors).

After the ceremony, the historic document remained on display inside St. Sophia’s Cathedral for public viewing throughout Christmas Day. On the cobblestone square outside the cathedral, amid subzero temperatures and snow flurries, thousands of people stood in line, waiting for their chance to see the tomos scroll.

The line extended from the cathedral’s arched entranceway for hundreds of meters, passing beneath a decorated Christmas tree, past the Bohdan Khmelnytsky Monument, up to the edge of an outdoor Christmas market where stereos blasted staple American Christmas hits like Bobby Helms’ “Jingle Bell Rock.”

Ukrainians are no strangers to harsh winters. And the gathered people seemed relatively unfazed by the arctic weather. They casually shook off the biting cold, breathing warm air into numbed hands. Some enjoyed a cup of mulled wine procured from the nearby Christmas market.

“I believe that obtaining independence by our church is an important step toward building Ukraine as an independent state,” Andrey Khomenko, a Ukrainian IT specialist who lives in Kyiv, told The Daily Signal.

When it comes to Ukraine’s overall divorce from Russia, “culture is one of the most difficult knots, which gradually needs to be untied,” Khomenko said.

It’s a long-range battle, marked by daily exchanges of fire from tanks, rockets, artillery, mortars, and small arms. At some places, no man’s land can be several kilometers wide. At others, the Ukrainians and their enemies are close enough to shout insults at each other.

The operative, Minsk II cease-fire—signed in February 2015—has effectively frozen the conflict along its current geographical boundaries. Yet, in reality, the war never ended. At its pleasure, Russia has maintained a cycle of waxing and waning violence by flaunting the cease-fire’s rules. The war remains a tool for Moscow to destabilize Ukraine and forestall its Western pivot, many security experts say. 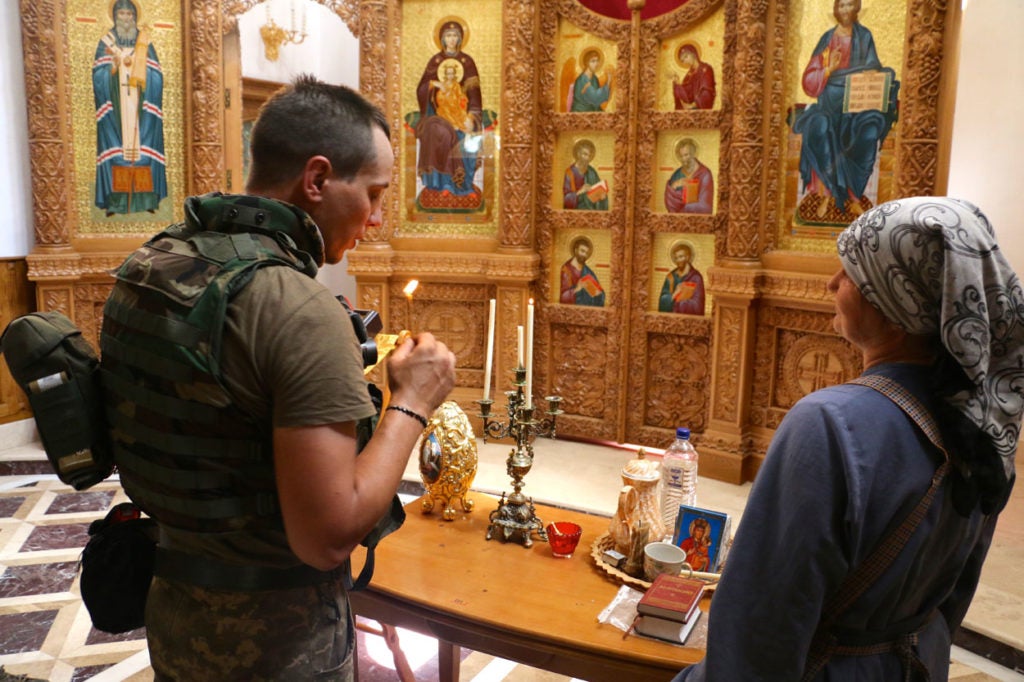 A Ukrainian soldier in the front-line town of Pisky enjoys a quiet moment inside a Russian Orthodox church.

Ukrainians’ attitudes toward Russia have hardened after more than four years of war. A December poll by Rating, a Ukrainian think tank, found that 63 percent of Ukrainians label Russia as an “aggressor country.”

Thus, amid the war’s backdrop, many Ukrainians see religious independence from Russia as a singularly patriotic achievement—a defiant act of self-determination, pushing the country further away from its former Soviet overlord.

“In my opinion, the independent church recreated the taste of freedom that has been steadily disappearing after the Euromaidan,” said Alexandra Nazola, a project manager at CFC Consulting, a Ukrainian strategic communications firm that co-founded the Ukraine Crisis Media Center.

Ukraine’s pro-Western 2014 revolution is colloquially known as the “Euromaidan,” or “Maidan”—a reference to Kyiv’s central square, Maidan Nezalezhnosti, which was the revolution’s epicenter.

Some worry the historic religious divorce between Russia and Ukraine could upheave the uneasy status quo in the Donbas conflict, especially in the wake of a Nov. 25 naval confrontation in the Black Sea, which nearly escalated the ongoing land war into a broader conflict.

“Russia is unpredictable. I do not think that [Russian President Vladimir Putin] needs any excuse to escalate the conflict in Ukraine,” said Andrii Ianitskyi, head of the Centre for Excellence in Economic Journalism at the Kyiv School of Economics.

“It seems to me that Russia can create an excuse if it wants to attack Ukraine again,” Ianitskyi said.

For her part, Kazdobina, of the Ukrainian Foundation for Security Studies, said any violence due to religious tensions would likely amount to nothing more than “local skirmishes.”

The greater danger, Kazdobina said, remains an escalation of the shooting war in the Donbas, or a maritime crisis in the Sea of Azov spiraling out of control.

Negotiations for autocephaly began under Viktor Yushchenko, who was president of Ukraine from 2005 to 2010. Ukraine’s parliament resumed the push in April last year, voting to appeal to Constantinople for an independent Ukrainian church.

For Poroshenko, who faces a tough re-election bid in March, the tomos of autocephaly is a key political win. Yet, despite the historical significance of Ukraine’s religious independence, polling shows that the war and jobs are the top voting issues for most Ukrainians. 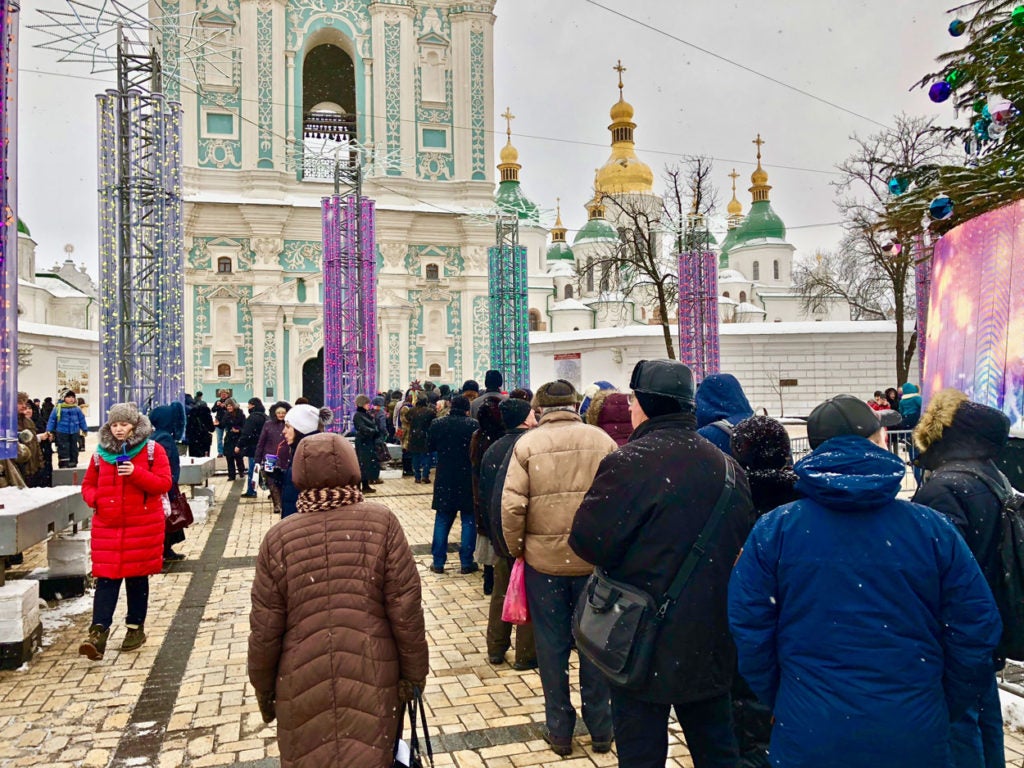 Ukrainians lined up outside of St. Sophia’s Cathedral in Kyiv on Jan. 7, hoping to see the document that established Ukraine’s independent national church.

Polling suggests, also, that the creation of an autonomous Ukrainian church is not of paramount concern to most Ukrainians. An August 2018 poll jointly conducted by the Razumkov Center and the Ilko Kucheriv Democratic Initiatives Foundation, two Ukrainian think tanks, found that 35 percent of Ukrainians supported the creation of an independent church, while 19 percent were opposed to it, and 33.5 percent said they were indifferent.

“An independent Ukrainian church is an important step in the divorce of Ukraine and Russia, but only one of many other steps,” Ianitskyi, from the Kyiv School of Economics, said. He cited closer economic ties with the European Union and promoting the use of the Ukrainian language over Russian as other key ways for Ukraine to cut ties with Russia.

“But the new church, of course, will reduce the influence of the Russian church in Ukraine,” Ianitskyi said. “This is an important event, of course.”

For his part, Poroshenko has played an outsized role in promoting the new Ukrainian church as a win for Ukraine against Russian influence.

“The creation of the autocephalous Orthodox Church of Ukraine is the pledge of our independence,” Poroshenko said during the Christmas liturgy at St. Sophia’s Cathedral in Kyiv.

“This is the foundation of our spiritual freedom,” Poroshenko said. “We’ve severed the last ties that connected us with Moscow and its fantasies about Ukraine as the canonical territory of the Russian Orthodox Church.”

The next challenge for the independent Ukrainian Orthodox Church is to secure recognition from other Orthodox churches. Yet, to do that, some experts say, Ukrainian church leaders may have to distance themselves from the Ukrainian government and prove the new church is open to outsiders.

“Truly, Ukrainians shall be proud of religious independence happening almost 30 years after the state’s independence. However, this may look like the rise of modern clericalism as church matters are influenced by the Ukrainian political establishment,” said Nazola, the CFC Consulting project manager. 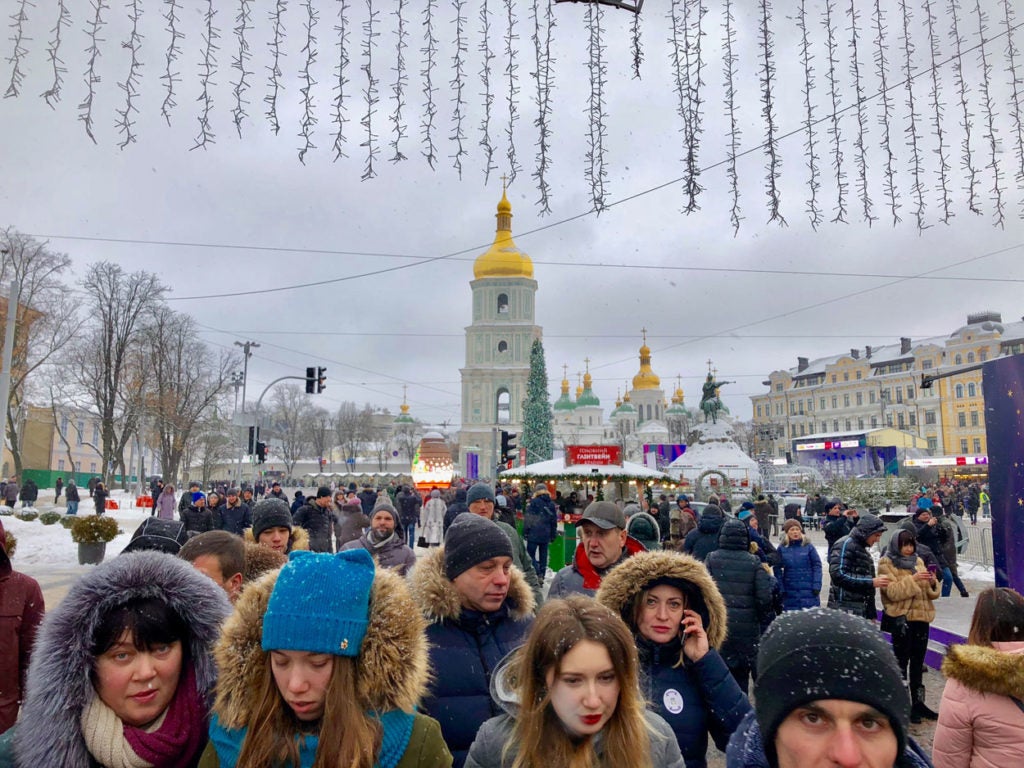 A December poll found that 63 percent of Ukrainians label Russia as an “aggressor country.”

“While Ukraine is becoming less and less affected by Russian cultural and historical narratives, it is important to not let Ukrainian politics fully influence the Orthodox Church of Ukraine,” Nazola told The Daily Signal.

Moscow, for its part, has accused the new Ukrainian church of being an organ of the Ukrainian state—a characterization that Kyiv rejects.

“What nobody wants in Orthodoxy is ethnophyletism, where only Ukrainians are allowed in the Ukrainian Church,” Nicholas Denysenko, an American professor of theology at Valparaiso University, said during an interview with the Religious Information Service of Ukraine.

“The other Orthodox churches, however flawed they are, are unnerved about Ukrainian nationalism,” Denysenko said. “They don’t understand how Ukrainians are discovering their identity, especially in this post-Maidan war period, and embracing patriotism, because they are not living in Ukraine and don’t understand the conditions of war.”