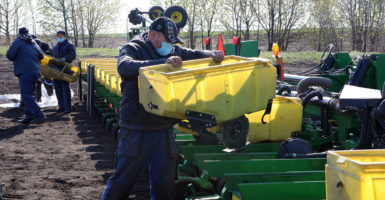 Employees of the Ukraina Nova Ltd. are involved in the sowing of sunflower seeds at an experimental field in Pervomaiskyi, Ukraine, April 29, 2020. (Photo: Vyacheslav Madiyevskyy/ Ukrinform/Barcroft Media via Getty Images)

The flight was one of the few to leave Ukraine that day—as part of a national lockdown to stop the spread of the coronavirus, the country’s airspace has been shut down to nearly all air travel for several weeks.

In the arrival hall at Helsinki-Vantaa International Airport, farmers and landowners waited Thursday evening to pick up their Ukrainian workers. According to the Finnish newspaper Ilta-Sanomat, the mood was “amazingly quiet” and “even nervous.”

“No warm hugs were seen, no shouts of rejoicing were heard, and the expressions of those who arrived were difficult to interpret with everyone wearing protective masks,” the newspaper reported.

Despite the apparently somber mood at Helsinki’s airport, the Ukrainians’ arrival was a welcome lifeline for Finland’s farmers.

Like many other European countries, Finland’s agricultural sector depends on migrant workers from Eastern Europe. Now, with Europe’s once porous borders mostly closed because of the coronavirus pandemic, those countries are facing acute labor shortages. Finland is short about 10,000 farm workers after coronavirus-related border closures, officials say.

“The situation has been downright grim,” said Marko Mäki-Hakola, director of business development for Finland’s Central Union of Agricultural Producers and Forest Owners.

Another chartered flight of Ukrainian farm workers was set to arrive Monday in Finland. And some 800 more Ukrainian migrant workers have registered for future charter flights to the European Union.

Ukrainian President Volodymyr Zelenskyy announced last month that he was closing Ukraine’s borders as part of the national lockdown. The news spurred a mass homecoming of workers abroad.

From March 13 to April 1, about 650,000 Ukrainians returned home, according to government data. Ukraine Business News reported that some 2 million Ukrainians have repatriated since the lockdown measures went into effect in March. It’s unclear, however, how many of those returnees originally were abroad for work.

Nevertheless, that mass homecoming clearly marks a historic reversal of the decadeslong leaching of Ukrainian workers by richer European countries. That slow exodus contributed, in part, to the decline of Ukraine’s overall population by about 20% since independence from the Soviet Union in 1991.

Nevertheless, some Ukrainians worry that the sudden influx of so many job-seekers could spur an unemployment crisis—especially as a global recession kicks in.

“There were no jobs for them before the epidemic; it’s hard to imagine the jobs appearing when there’s going to be an economic recession,” said Julia Kazdobina, head of the Ukrainian Foundation for Security Studies.

“I believe that the return of 2 million labor migrants to Ukraine will be a social disaster,” said Denys Voroshylov, 40, a marketing director and entrepreneur who lives in the Ukrainian city of Kharkiv. “They left because Ukraine did not have decent jobs for them, and there is not a single signal that new jobs will appear.”

Some Ukrainian officials, on the other hand, welcome their repatriated fellow citizens. They say the government should try to encourage those returned workers to stay.

To that end, this week Kyiv plans to begin a program to give returning workers low-interest loans to start businesses in Ukraine. Lawmakers also have proposed a public works program, mainly aimed at improving roads, which could help put Ukrainians back to work.

“These are people who would probably be very useful for the development of the economy within the state,” Ukrainian Prime Minister Denys Shmygal said in a recent interview. “We want to try to keep people in Ukraine, and we will do our best for this.”

Kazdobina, for her part, was skeptical of the government’s plan.

“The government is working on a program of cheap loans for businesses. However, most of those who worked abroad worked as hired labor, so it’s hard to imagine they have developed the skills necessary to run a business,” Kazdobina said.

Prior to the global pandemic, Ukraine’s economy was just regaining its legs after the twin body blows of revolution and a war with Russia in 2014.

At the beginning of 2020, a survey by the European Business Association showed that 41% of Ukrainian small businesses were planning new hires and 45% planned to raise wages.

“Before the lockdown, Ukrainian businesses were expecting growth and there was a clear demand for additional workforce,” said Iryna Fedets, a senior research fellow at the Institute for Economic Research and Policy Consulting, a Ukrainian think tank.

That positive beginning to the year was quickly overshadowed by the pandemic.

As of Friday, Ukraine recorded 7,647 COVID-19 cases and 193 deaths from the disease. Kyiv expects the number of cases to peak sometime in May. The national lockdown measures, originally set to expire April 24, now are expected to last until May 11.

All nonessential businesses are closed, as are schools, parks, and public transportation. With few exceptions, foreigners aren’t allowed in the country, and air travel remains at a standstill. Wearing masks outdoors is mandatory.

The lockdown has sent Ukraine’s economy into a tailspin. The International Monetary Fund predicts the country’s gross domestic product will fall by almost 8% this year.

Consequently, the number of unemployed has roughly doubled to about 2.5 to 2.8 million, according to the Ukrainian Chamber of Commerce and Industry. That number corresponds to a national unemployment rate between 13.7% and 15.4%, officials say.

Experts point to several major pitfalls regarding Ukraine’s repatriated workforce. For one, the job market, while on the mend, was still relatively weak before the pandemic—which is the reason why so many Ukrainians sought work abroad in the first place.

Additionally, Ukraine received $15.8 billion in wage remittances from workers abroad in 2019—the largest amount of any European country, according to the World Bank. That number represents roughly 10.5% of Ukraine’s gross domestic product.

“If there are no jobs and the only way to provide for themselves is to go abroad, [Ukrainians] should not be prevented from going,” said Kazdobina of the Ukrainian Foundation for Security Studies.

“If foreign countries want to organize recruitment to gather fruit and vegetables, Ukraine should let its citizens go,” Kazdobina added.

At the outset, Ukraine’s independence from the Soviet Union in 1991 was an economic catastrophe.

Ukrainian industrial production reduced by more than half from 1991 to 1996—a bigger drop than what the Soviet Union experienced during World War II when half the country was occupied by Nazi Germany and 24 million people, both civilians and military, were killed.

Hyperinflation from 1992 to 1994 left about 80% of Ukrainians in poverty and roughly one-quarter of the population unemployed. For Ukrainians on minimum wage, their purchasing power for basic food items fell by as much as 95% from 1992 to 1994, according to studies from the Kyiv National Economic University.

That post-Soviet economic meltdown spurred many Ukrainians to look for work abroad. And, over the years, migrant or seasonal work in Europe has become the means by which many Ukrainians support their families or save up financial nest eggs.

Now, with a post-pandemic recession in the works, that post-Soviet status quo isn’t likely to change in the near-term, experts say, despite the optimistic economic tailwinds heading into 2020.

“When the trade, services, and other businesses resume their work after the lockdown is lifted, it will probably take time for them to get to their pre-crisis income,” Fedets said.

“For those who have the option to earn more by going abroad, the best strategy will be to do that until the Ukrainian economy recovers.”