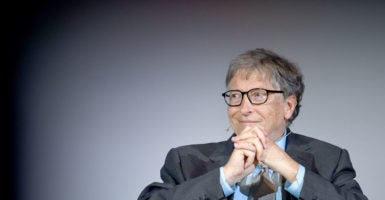 Referring to the meeting, the Alaska Republican lawmaker said:

[Gates] is focused on issues related to a warming climate, and I think he has come to appreciate that if we’re really going to work to reduce emissions, the clean energy source is really nuclear.

So, how are we making advancements in that area?

That has been the question for Congress, and the subject of many conferences and iterations of legislation on advanced nuclear technologies.

Scores of advanced nuclear energy technology concepts have cropped up over the years and received particular attention as large conventional reactors have become costly to build and the innovation of Silicon Valley has taken off.

These designs aim to provide a variety of options—smaller, more efficient, safer, less waste, different fuels, and the potential for applications beyond power generation, such as medical isotope production and process heat.

With more than 75 projects underway in North America alone, competition is steep, but one has yet to be tested or built in the U.S. since the days when peaceful uses of nuclear energy were first being explored in the 1950s.

Frustration has been building as to why—hence, Murkowski’s question.

To date, the attention in Washington has largely focused on how to subsidize the costs of research, development, approval, and construction of advanced nuclear technology.

That approach is deeply problematic for a variety of reasons. Chief among those problems is the reality that throwing taxpayer money at companies isn’t going to solve two of the biggest problems facing advanced nuclear companies; namely, overregulation and a failed nuclear waste management policy.

Neither of those issues is a secret.

TerraPower, the traveling-wave reactor technology backed by Gates, chose to license its design in China explicitly because there is no regulatory pathway in the U.S. for innovative technology, let alone an efficient one for existing technology.

The Nuclear Regulatory Commission’s licensing process is built around existing technology, and inasmuch as existing plants fund most of the commission’s budget, there’s little incentive to devote time and resources to advanced technologies.

On waste management, Rebecca Casper, the mayor of Idaho Falls, Idaho, a self-proclaimed fan of nuclear power, is surely not alone when she said:

We’ve got to deal with, at some point, the nuclear waste stream that comes from commercial nuclear. There’s a part of me as a local that … resents the fact that I have to answer to that, as I’m trying to sell something that’s very good for my community, my state, my nation, and my world.

This is coming from a mayor who has energetically welcomed the prospect of a small modular reactor to service Idaho Falls.

There are innovative technical and political solutions to nuclear waste management, but our centralized approach, where the federal government—rather than the private sector—is responsible for management, all but ensures nothing can get done.

Advanced nuclear reactor designs provide some compelling answers to nuclear waste management, as some of them are intended to produce less waste or are designed to use nuclear waste itself as fuel.

But there’s little incentive to pursue these and other innovative solutions in an environment where politicians, rather than nuclear power generators, are responsible for waste management.

Mitigating the cost of bad policies through subsidies leads down an almost predictable path of failure. While taxpayer money will surely get some advanced reactor designs through the process (likely at greater cost and time consumed), what of the technologies without the government’s backing left to muddle through a dysfunctional regulatory regime?

How is an electricity provider to assure a public utility commission or community that nuclear waste storage won’t be an intractable David versus Goliath battle with the feds, given our current approach?

Where there is political will, there are answers to the question from Murkowski, the chairwoman of the Senate Energy and Natural Resources Committee.

In September, The Heritage Foundation offered up a list of recommendations that begins to get at these issues of overregulation and nuclear waste.

Though far from exhaustive, it’s a place to start.

Fixing those underlying policy problems and getting to real, long-term solutions, rather than one-off subsidy programs, will allow people like Gates to discover, test, and deploy those advancements people are hoping to see.