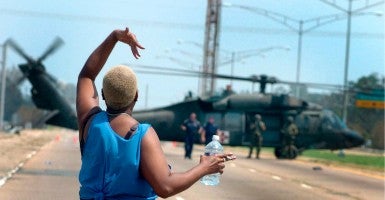 A woman waves for the National Guard to be evacuated during a rescue operation for Hurricane Katrina victims. (Photo: Gerardo Mora/EPA/Newscom)

Winds of 127 mph ripped across Louisiana 10 years ago, leaving in its wake devastation of property, destruction of lives, and a death toll of 1,836 people.

New Orleans was among the hardest hit due to its location on the Gulf Coast with levees breaching in the aftermath of Hurricane Katrina.

FEMA called it “the single most catastrophic natural disaster in U.S. history,” and it is estimated to have caused $108 billion from the damage that ensued.

While the majority of the city of New Orleans had been evacuated before the worst of the storm, many natives felt they could endure it in their own homes, like they had before. The combination of the Category 3 hurricane with the failure of the levees led to 80 percent of the city being immersed in water, and the need for tens of thousands to be rescued.

Hurricane Katrina touched ground 10 years ago this week, yet its presence is still felt as New Orleans has rebuilt itself from the destruction.

Here are 19 pictures showing the aftermath of that catastrophic storm and the people who survived it. The National Oceanic and Atmospheric Administration released this satellite image of Hurricane Katrina when the storm was a Category 5 hurricane. (Photo: NOAA/UPI Photo/Newscom) The aftermath of Hurricane Katrina shows the devastation of the storm as it ripped roofs off of structures and downed traffic lights. (Photo: Kristin Callahan/ACE Pictures/Newscom) A man clings to the top of a vehicle before being rescued by the U.S. Coast Guard from the flooded streets of New Orleans, six days after the hurricane struck the city. (Photo: Robert Galbraith/Reuters/Newscom) Coast Guard Petty Officer Scott Rady gives the signal to hoist a pregnant woman from her apartment. Rady is a rescue swimmer sent from Florida to help aid in search and rescue efforts in the wake of Hurricane Katrina. (Photo: NyxoLyno Cangemi/U.S. Coast Guard/ZumaPress/Newscom) A family is being evacuated from the city during a mass evacuation of New Orleans. Emergency relief workers and elements from the U.S. Coast Guard, U.S. Army, Navy, Air Force, Marines and National Guard troops from across the United States responded. (Photo: Bartlett/SIPA/Newscom) Coast Guard Petty Officer Shawn Beaty looks for survivors in the wake of Hurricane Katrina. Beaty is a member of a helicopter rescue crew sent from Florida to assist in search and rescue efforts. (Photo: PA2 NyxoLyno Cangemi/UPI Photo/Newscom) A weak and hungry dog takes a break from swimming on a church windowsill. Trapped blocks away from dry ground, the dog had no way out of the flooded area without being rescued. More than 250,000 pets were lost during the storm. (Photo: Ronna Gradus/KRT/Newscom) Members of multiple search and rescue teams and local officials help evacuate people trapped in their flooded homes. Floodwaters engulfed much of New Orleans as officials feared a steep death toll and planned to evacuate thousands remaining in shelters after the historic city’s defenses were breached by Hurricane Katrina. (Photo: Vincent Laforet/UPI Photo/Newscom) Ninety-one-year-old Catherine Carrere sits outside her home in New Orleans as relatives inside try to retrieve some of her belongings. Carrere said she had no flood insurance and doesn’t know how she will rebuild her home. (Photo: A.J. Sisco/UPI Photo/Newscom) Search and rescue crews make their way down the streets of Long Beach, Miss., in search for survivors and the dead in the aftermath of Hurricane Katrina. (Photo: Nuri Vallbona/KRT/Newscom) A makeshift grave was made during the aftermath of Hurricane Katrina. An estimated 1,836 people died due to the catastrophic storm. (Photo: Haley/SIPA/Newscom) The abandoned scene after the last remaining residents of New Orleans evacuate the city after several days without relief aid. (Photo: Haley/SIPA/Newscom) Two members of the National Guard put up the American flag amidst the rubble of the storm. (Photo: Haley/SIPA/Newscom)