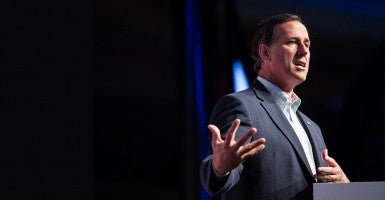 Former Republican presidential candidate Rick Santorum sharply criticized efforts to abolish the Export-Import Bank on Friday, arguing that doing so would be “tying the hands of our manufacturers.”

When asked about reauthorization of the institution at a summit hosted by Eagle Forum, Santorum said, “I think it’s a mistake for us to be out there focused on the Export-Import Bank.”

Though the former Pennsylvania senator expressed sympathy for what he described as the “strain of libertarianism in the Republican party” that opposes Ex-Im, he ultimately criticized the effort as detached. “I think one of the problems with an ideology is that it’s an ideology,” Santorum explained, “that it has no foundation in practical roots of what goes on in society.”

Instead, Santorum advocated government oversight that “creates a level playing field” for competing businesses, including in international markets. According to the former senator, U.S. manufacturers compete with overseas corporations that enjoy both cheaper labor and similar foreign government financing.

“We can’t just look at other manufacturers in the United States, we have to look at how do we compete with and how do we create a level playing field vis-à-vis the competition that exists around the world,” he said.

Santorum urged conservatives to draw inspiration from conservative icon Russell Kirk and be open to the idea of compromise.

“Kirk was as conservative as you can get,” Santorum remarked, “but he also understood that compromise isn’t a bad thing and we can’t just be rigid and apply these principles to everything because not everything’s the same.”

Santorum criticized those who find the Ex-Im bank a non-negotiable, saying that a hardline approach is “just stupid…that’s just stupid and not how you move the ball forward.”

Santorum’s remarks followed those of his former Senate colleague and Heritage Foundation president Jim DeMint, who opposes reauthorization of the Export-Import Bank.