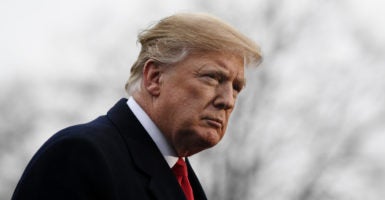 Today, senators are debating amended criminal justice legislation that the House passed in May, by a vote of 360-59, with support from President Donald Trump and law enforcement professionals.

The bill carefully merges Trump’s agenda on public safety and the economy, using evidence-based reforms from conservative states that have helped to reduce crime.

And if Monday’s vote in the Senate of 82-12 to debate these provisions is any measure, then the Senate may be on its way to a significant victory for further crime reduction and economic growth.

On Monday, Sen. John Cornyn, R-Texas, took to the Senate floor to explain the First Step Act, and how Congress has been debating its various provisions since 2013. As a former Texas district court judge, associate justice of the Texas Supreme Court, and attorney general of Texas, few have more conservative and “tough on crime” bona fides then Cornyn.

Yet many who join Cornyn in support of the First Step Act share similar backgrounds and principles, including the Fraternal Order of Police, International Association of Chiefs of Police, National District Attorneys Association, National Organization of Black Law Enforcement Executives, police officers and sheriffs from across the country, and a broad conservative coalition that includes 175 former federal prosecutors, including two former U.S. attorneys general.

The problem that the First Step Act would address, as Cornyn said, is that “the cycle of crime is all too common.” Federal prisoners have too many “frequent flyers” who revolve between “prison and crime.”

The fact is that 95 percent of all federal inmates will be released someday and, as the U.S. Sentencing Commission reports, nearly half of them are re-arrested within eight years.

“There are some people, unfortunately, you can’t save,” Cornyn said; “but there are others who understand that they have made a mistake, paid their debt to society, and want to turn their lives around, and those are the types of people that [the First Step Act] speaks to.”

Cornyn then explained how successful reforms in Texas contributed to historic decreases in crime and informed Congress’ drafting of the First Step Act.

That bill not only embodies lessons from conservative states—and, in turn, the Republican platform of 2012 and 2016—it also parallels broader lessons from the law enforcement community.

In a speech at The Heritage Foundation last year, former New York City Police Commissioner Bill Bratton explained how he “successfully instituted major management initiatives and the strategic deployment of public safety resources” and “the city achieved a phenomenal 36 percent decrease in serious crime, including a 45 percent drop in murder.”

Bratton said that “crime is down in New York City” in large part “due to the strategies we are employing, with the focus on problem solving rather than incidence response. Specifically, we are getting better at understanding … changing behavior at the street level and controlling behavior, and thus preventing crime farther down the line.”

The First Step Act offers a similar problem-solving approach to managing prisons. It starts by using a validated risk-and-needs assessment of every federal inmate to identify who poses a low, medium, and high risk of committing crime again when they are eventually released.

The legislation would incentivize each inmate to participate in evidence-based and data-driven programming to target behavioral changes, just as Bratton did and in order to prevent crime “farther down the line,” also just as Bratton did.

By mandating ongoing evidence-based programming and actuarial assessments of each inmate’s risk to public safety, the First Step Act would bring the same effective approach inside federal prisons.

As Cornyn said on Monday, “there’s been a lot of mythology, and misunderstanding, and misrepresentation of what’s in this bill.” But the First Step Act is fundamentally about helping to end “the cycle of crime that continues to plague communities across the country.”

The Senate is sure to see some proposed amendments to the bill, but it would be wise to follow the lead of its former law enforcement professionals, particularly Sen. Mike Lee, R-Utah, a former federal prosecutor who has also been among the First Step Act’s most vocal advocates.

Business groups have also joined Trump and conservative law enforcement professionals in support of the First Step Act, including the U.S. Chamber of Commerce and the National Association of Manufacturers.

The First Step Act would offer inmates who take responsibility for their actions and for their futures more access to help from nonprofit and private groups, including potential employers and faith-based mentorship programs.

The chamber has said that the First Step Act’s “employment and training opportunities combined with recidivism reduction programs are a key element in helping the incarcerated find gainful employment upon their release.”

And the National Association of Manufacturers states that the First Step Act will “offer redemption for nonviolent offenders and open new doors for Americans looking for the dignity of a job. Today, manufacturers have more than a half a million jobs we need to fill, so we can help these Americans get a new start, just as they can help us grow and succeed here in the United States.”

Trump has said that the reforms in the First Step Act—based on conservative state reforms, and with support from law enforcement experts and the business community—would help “make our communities more secure … to make our country more prosperous,” and to “make America safer, and stronger, and greater.”

Trump is “waiting with a pen” for Congress to pass the First Step Act.

Let’s hope he gets to use it.