Here’s What Opponents of Criminal Justice Reform Get Wrong 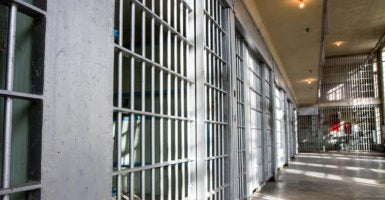 "It is a profound waste of human capital, at taxpayer expense, to merely warehouse inmates while private and nonprofit entities are offering help," writes John-Michael Seibler. (Photo: txking/Getty Images)

Some arguments against the modest prison and sentencing reforms in the Senate’s First Step Act echo an influential claim from the 1970s attributed to the late sociologist Robert Martinson: When it comes to reducing recidivism rates among inmates, “nothing works.”

Once taken out of its original context, that claim resounded in legislatures across the country ever since.

Unfortunately, few lawmakers know the context of that claim, or how Martinson’s research later developed, or what the full story means for the First Step Act.

At its core, the First Step Act would seek to reduce crime by subjecting each federal inmate to a validated risk and needs assessment; evaluating each federal inmate’s risk of committing an offense once they re-join society, as 95 percent will; and matching inmates to programs designed to address whatever issues factored into their personal choice to victimize others, be it a lack of anger management skills or education, substance abuse issues, or something else.

The bill would offer limited incentives called “earned time credits” to inmates who were not convicted of any one of the 50 disqualifying offenses (mostly terrorism, sex, and violent offenses), and who also prove to prison officials, over the course of multiple objective assessments, that they pose a low threat to public safety.

Only those inmates would be able to cash in earned time credits to serve out the final portion of their sentence under a lower-cost form of confinement such as a half-way house. If they fail to remain on good behavior, it’s back to prison.

The first step to buying in to this rehabilitation scheme, however, is to believe that at least some inmates are capable of change.

Opponents of the First Step Act apparently do not believe in redemption, and do not want you to believe, either.

Leading that opposition, Sen. Tom Cotton, R-Ark., suggests that if the First Step Act becomes law, it will create “future victims” because releasing any inmate from prison can bring only “tragedies.”

Never mind the status quo that, according to the U.S. Sentencing Commission, 49.3 percent of federal offenders are re-arrested within eight years, leaving plenty of room for improvement at the bureaucracy that is the federal Bureau of Prisons.

And never mind the abundant stories of ex-offenders who have seized opportunities for self-improvement in prison and transformed their lives. Never mind the Justice Department’s own data showing anywhere from 15 to 33 percent reductions in recidivism among inmates who participate in some programs that already exist in prisons.

In fact, the president’s Council of Economic Advisers recently found that “mental health or substance abuse treatment” in prison may reduce otherwise skyrocketing costs of crime and incarceration “by up to $5 for every $1 invested by taxpayers.”

Simply put, it is a profound waste of human capital, at taxpayer expense, to merely warehouse inmates while private and nonprofit entities are offering help.

Over abundant evidence in support of the First Step Act, the bill’s opponents continue to echo a misreading of an outmoded essay by Martinson, the late sociologist.

In the late 1960s, while crime rates were on the rise, Martinson joined other researchers in conducting a survey of 231 studies on prison rehabilitation programs. Too many corrections officials at the time were relying on hunches about how to reduce recidivism, rather than gathering, studying, and acting on hard data. The typical result was failure.

Martinson’s survey hoped to shed light on what actually worked, but it was so full of “methodological complications”—as Martinson himself wrote in a 1974 essay titled “What Works? Questions and Answers about Prison Reform”—that “one cannot be certain how stable and reliable the various findings are.”

The programs that Martinson surveyed suffered from so many disparate problems—ranging from a lack of training or “buy in” among prison officials who were administering them, to inadequate evaluation methods—that ultimately, the researchers concluded that more work was needed.

Yet in the same 1974 essay, Martinson posed the question, “Does nothing work?”

He answered that while he and his colleagues had discovered no silver bullet to reduce recidivism, “it is just possible that some of our treatment programs are working to some extent, but that our research is so bad that it is incapable of telling.”

That in turn influenced policymakers who were struggling with increasing crime rates to abandon rehabilitation in corrections policy. As New York University law professor Rachel Barkow has noted, “jurisdictions took notice” of Martinson’s work “and began to doubt the efficacy of pursuing rehabilitation as a goal of criminal punishment.”

By the time that the Supreme Court upheld the federal sentencing guidelines in Mistretta v. United States (1989), the court had noticed that rehabilitation “was regarded by some as an unattainable goal for most cases.”

Since then, research has shown that incarceration has contributed as much as 35 percent to the decline in violent crime since the 1980s, while at least 65 percent must be attributable to other factors, including improved policing practices.

Given today’s rates of recidivism among federal inmates, at nearly 50 percent, we know that there is room for improvement in incarceration practices.

But after decades of decreasing crime rates, 2014-2016 saw violent crime increase in several major cities, and some opponents of the First Step Act are, ironically, still clinging to the “fake news” of the 1970s.

In the interest of not maintaining the status quo and expecting different results, consider the part of Martinson’s story that many people miss.

The quality of data and research on corrections practices has improved since Martinson’s original survey, just as Martinson had hoped they would—and just as they did for the Oakland A’s, HR departments, government inspectors, and a myriad of corporations that now rely on data instead of hunches to make better decisions.

In 1979, after studying more anti-recidivism programs, Martinson wrote, “Contrary to my previous position, some treatment programs do have an appreciable effect on recidivism. Some programs are indeed beneficial; of equal or greater significance, some programs are harmful.”

Martinson concluded with the following: “The current system of sentencing in the United States must be reformed. … Those treatments that are helpful must be carefully discerned and increased; those that are harmful or impotent eliminated.”

And some lawmakers, including Cotton, have ignored the better half of his research.

Along with abundant data from the Justice Department, the president’s Council of Economic Advisers, and elsewhere, it suggests cause for optimism toward evidence-based anti-recidivism programs.

Fortunately, the First Step Act would advance that field in the direction that Martinson ultimately called for, using what criminal justice scholars Francis Cullen and Paul Gendreau summarized as these three goals: “(1) focus on what works to reduce recidivism in corrections, (2) make judgments based on the evidence, and (3) derive the evidence from a comprehensive review of methodologically sound evaluation studies.”

With the First Step Act, senators now have a choice: They can adopt meaningful, evidence-based reforms designed to improve public safety, or they can engage in fearmongering and maintain a status quo that, in 2011, the House Appropriations Committee deemed “financially and socially unsustainable.”

Martinson would, no doubt, join them in hoping to see the bill debated on the Senate floor.