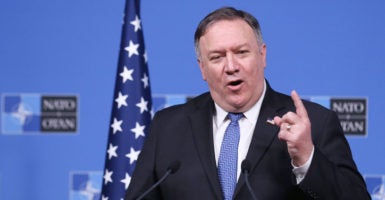 "Russia's actions gravely undermine American national security and that of our allies and partners," Secretary of State Mike Pompeo said Dec. 4 in Brussels. "It makes no sense for the United States to remain in a treaty that constrains our ability to respond to Russia's violations." (Photo: Xinhua/Sipa USA/Newscom)

Secretary of State Mike Pompeo announced Dec. 4 that the United States has found Russia in material breach of the Intermediate-Range Nuclear Forces Treaty and “will suspend our obligations as a remedy, effective in 60 days unless Russian returns to full and verifiable compliance.”

In a separate statement, the NATO foreign ministers declared that they “strongly support the finding of the United States that Russia is in material breach of its obligations under the INF Treaty.”

They added, “Russia’s violation of the INF Treaty erodes the foundations of effective arms control and undermines Allied security.”

The decision comes after the United States and its NATO allies have repeatedly raised concerns over the past five years with the Russian government regarding the development and fielding of the Russian-designated 9M729 ground-launched cruise missile and urged Moscow to return to compliance with the treaty.

The 9M729 missile’s range is in violation of the INF Treaty’s limitations, and the deployment of multiple 9M729 missile battalions poses a significant risk to the United States and its European allies.

The U.S. remains in full compliance with its obligations under the INF Treaty, as affirmed by our NATO allies in a NATO summit declaration in July.

Signed in 1987 by the Unites States and the Soviet Union, the INF Treaty banned ground-launched ballistic and cruise missiles with both nuclear and conventional warheads, as well as their launchers, with a range between 500 and 5,500 kilometers (roughly between 300 and 3,500 miles).

The United States’ presentation of information detailing the Russian violations in more than 30 formal engagements with the Russian government were repeatedly met with lies, cover stories, and even denials of the missile’s existence until the U.S. publicly announced the missile system’s Russian designator.

Even then, Russia falsely claimed the missile’s range was less than 500 kilometers. Russia had a clear path to return to compliance by verifiably destroying this system in accordance with the treaty’s measures, but it has so far chosen not to take those actions.

The U.S. State Department has also stated, “In addition to violating the INF Treaty, Russia is also not complying with its obligations under several other arms-control treaties, including the Open Skies Treaty, the Chemical Weapons Convention, and the Conventional Armed Forces in Europe Treaty.”

Russia’s violations of these treaties provide Moscow with a distinct military advantage over the U.S. and our NATO allies.

U.S. efforts to bring Russia into compliance with its arms control treaty obligations via sanctions and other methods over the past decade have proven unsuccessful.

Now is the time to take new approaches, such as withdrawing from ineffective treaties to counter Russia’s military advances and blatant disregard for international law.