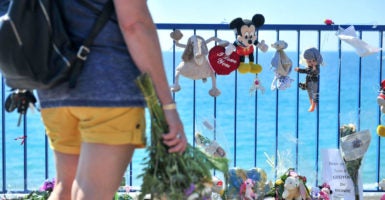 A visitor stops at a memorial on the Promenade des Anglais in tribute to the 84 who died the terrorist attack in Nice, France. The attack was "the fault of a state, failing in its first priority, which is the protection of our citizens," the leader of France's far-right National Front party says. (Photo: Norbert Scanella /Panoramic/Starf/Starface /Polaris/Newscom)

KYIV, Ukraine—Whether referring to Russian aggression in the east or to the threat of Islamist terrorism in the West, Europe’s political, media, and religious elite are increasingly using the word “war” to describe the Continent’s security challenges.

The day after the July 14 terror attack in Nice, in which a man drove a large truck into a crowd, killing 84, French Prime Minister Manuel Valls said France was at war, “both abroad and on our soil.”

“For years, we have lived, fundamentally, with a kind of insouciance, as though war could not catch up with us, as though history was not tragic,” Valls said. “But war is here, and it is different from the ones that we knew in the 20th century.”

Less than two weeks later, Pope Francis echoed Valls’ remarks when he said the “world is at war.”

“The word we hear a lot is insecurity, but the real word is war,” the pope told reporters while commenting on the murder of a Catholic priest in Normandy by two Islamic State terrorists and a string of violent incidents across Germany.

Across Europe, the word “war” is increasingly being used to describe the Continent’s security challenges.

“The current security architecture in Europe, which relied on both the Helsinki Final Act and the Paris Charter, has now collapsed, following Russia’s aggression in Ukraine,” Estonian President Toomas Hendrik Ilves said in September 2014 as Russian tanks were blitzing across eastern Ukraine.

Others claim, however, that Europe’s security crises are part of a global return to regional power struggles, as well as an anti-globalization movement, which has rejuvenated nationalism worldwide.

“Everything is connected; basically what we are seeing is the collapse of the world order as we have known it since World War II, and we—politicians, intel, and security agencies—still struggle to understand it,” the European director of a private intelligence and security firm told The Daily Signal on background.

Admittedly, while sitting in a Parisian café, a Berlin beer garden, or a London pub, it’s somewhat of a stretch to really believe another conflict like World War II ever could happen again in Europe. Some say, however, this confidence in European security is misplaced, reflecting the historically perennial trap of assuming the next war, or the events leading up to it, will be like the last.

“There have been large-scale atrocities on the Continent in recent years—in Madrid, London, and at the Charlie Hebdo [magazine] offices, in Paris, in January of last year—but in the aftermath of this one there is a realization that Europe, its cities, and all those institutions predicated on unending peace are now vulnerable to bewilderingly rapid developments,” Henry Porter, the British editor of Vanity Fair, wrote in January, referring to the November terror attacks in Paris.

After the Nice terror attack, a parade of French politicians of all political stripes proclaimed France was at war with Islamist terrorism.

These proclamations echoed similar remarks made after the January 2015 attacks in Paris on the satirical magazine Charlie Hebdo and a Jewish kosher market, as well as the November 2015 terrorist attacks in the French capital.

“We are in a war against jihadist terrorism which is threatening the whole world,” French President Francois Hollande said following the November attacks.

France’s counterterrorism efforts comprise military action abroad, including airstrikes in Iraq and Syria, and operations in North Africa, as well as a national state of emergency, which has given law enforcement and intelligence officials more latitude in pursuing suspected terrorists within France.

These strategies have generated a growing chorus of critics, with some politicians and political opponents of Hollande claiming the French president isn’t doing enough to keep the country safe.

In a speech posted to Facebook, Marine Le Pen, leader of France’s far-right National Front party, said the Nice attack was “the fault of a state, failing in its first priority, which is the protection of our citizens.”

“French politicians love to use the term ‘la guerre,’ or ‘the war,’ to talk about the war against terrorism,” Leela Jacinto, a reporter for France 24, wrote for Foreign Policy, adding:

What they’ve never seemed to absorb is that this is actually a war against themselves. All the major jihadi attacks in France over the past 18 months have been conducted by French nationals or residents.

“My back cringes when Hollande states that France is at war with ISIS and will do whatever it takes to defeat them in Syria; that is really not where France will defeat anything,” the intelligence contractor told The Daily Signal. “The enemy is in the suburbs and towns of France, and it has little directly to do with ISIS [the Islamic State] … ISIS will disappear eventually, but that will do nothing to stop the terror, unfortunately.”

No region of Europe is more emblematic of the Continent’s precarious security situation than eastern Ukraine.

War is a fact of life along the front lines in Ukraine’s southeastern Donbas territory, where government troops and paramilitary units have battled combined Russian-separatist forces since spring 2014.

“There is still a war on,” U.S. Ambassador to Ukraine Geoffrey Pyatt told The Daily Signal in an interview. “There are 1.7 million IDPs [internally displaced persons]. The troops are mobilized. And most importantly, people are still dying.”

Along front lines stretching more than 200 miles in eastern Ukraine, villages are in ruins from two and a half years of heavy artillery bombardments, rocket attacks, and tank shots. Trenches scar Ukraine’s famous sunflower fields, remindful of images from the Somme or Verdun, albeit on a much smaller scale.

Nearly 18 months after the war’s second and current cease-fire went into effect, fighting is still a daily occurrence up and down the front. So are casualties on both sides—military and civilian.

“Russia has the ability to turn the violence on and off as they choose,” Pyatt said.

More than 10,000 have died so far in the conflict, according to U.N. estimates. A spike in hostilities this summer, largely overlooked by Western media amid the terrorist attacks in Western Europe, has served as a stark reminder of the conflict’s potential to escalate into something bigger and deadlier.

“A Europe whole, free, and at peace rises or falls with Ukraine,” said Victoria Nuland, assistant secretary of state for European and Eurasian Affairs, in a January 2015 speech at the Brookings Institution. “Ukraine’s frontline for freedom is ours as well.”

Moscow’s seizure of Crimea and military intervention in Ukraine have countries throughout Eastern Europe preparing for war with Russia.

In NATO’s Baltic member countries, the ranks of civilian volunteer militias have swelled since Russia’s military intervention in Ukraine in 2014, reflecting the deadly seriousness with which politicians and populations in Eastern Europe consider the possibility of war with Russia—a sometimes difficult concept for Western Europeans and Americans to understand.

The Soviet era, with all its attendant oppression, limited opportunity. Stifling of free expression is still a living memory for many in Eastern Europe.

Russian President Vladimir Putin has magnified this latent mistrust toward Russian with his military brinksmanship across the region, including the buzzing of NATO ships and aircraft by Russian warplanes, as well as subversive propaganda campaigns and cyberattacks to stir separatism among minority Russian populations.

To reassure its eastern members and to send a message of deterrence to Moscow, NATO has announced plans to deploy military units to Eastern Europe in numbers unmatched since the Cold War.

At the NATO summit in July in Warsaw, Poland, alliance leaders formally announced the planned deployment of four combat battalions to Poland, Estonia, Latvia, and Lithuania on a rotational basis beginning next year. The battalions will be fielded by Canada, Germany, the United Kingdom, and the United States.

These deployments are in addition to a previously announced U.S. plan to deploy about 3,500 troops to Eastern Europe on a rotational basis.

NATO Secretary General Jens Stoltenberg said the deployments will send a message that “an attack against one ally will be met by forces from across the alliance.”

Military experts almost universally agree that NATO’s pledged military presence in the Baltics and Poland will not be enough to thwart a Russian invasion. Rather, the deployments are considered “tripwire forces,” presumably meant to deter Russia from an attack due to the risk of spurring a massive NATO response to defend forward units.

The Kremlin has countered NATO’s eastward pivot by sending weapons and troops to Russia’s Kaliningrad enclave and annexed Crimea. Also, Russia has been building up new forward operating bases along its western borders with Ukraine, according to news reports, highlighting a tit-for-tat repositioning of military forces across the region reminiscent of the Cold War.

Slawomir Debski, director of the Polish Institute of International Affairs, said the Russian response has more to do with domestic propaganda machinations than exerting pressure on NATO to back down.

Russia’s military moves are meant to “show to Putin’s domestic audience that the country is surrounded by enemies and he is the only leader that can save Russia,” Debski told The Daily Signal.