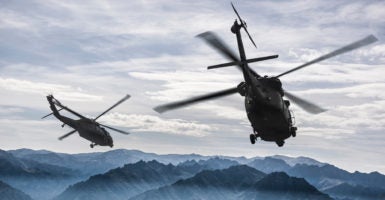 "Unless the military’s capabilities are maintained, the United States’ ability to maintain peace will be nullified," write Cooper Millhouse and Fred Bartels. (Photo: guvendemir/Getty Images)

Cooper Millhouse is a member of the Young Leaders Program at The Heritage Foundation.

[R]obust U.S. military power produces positive spillovers in other areas of statecraft. … Put simply, if the United States did not command such impressive military power, it would be far less effective in achieving its economic and diplomatic goals.

With these words, in testimony before the House Armed Services Committee on Sept. 26, Hal Brands established the clear connection between our military and our foreign policy goals.

Brands, a professor of global affairs at Johns Hopkins University, a prolific author, and student of American grand strategy, was speaking in support of a U.S. military that is in the first stages of a fragile rebuilding process.

The military currently lacks the capabilities necessary to respond to two major conflicts simultaneously, the gold standard for a superpower.

The Heritage Foundation’s Index of U.S. Military Strength has recorded a significant decline in the conflict readiness of the U.S. armed forces between 2015 and 2018, particularly within the Army and Air Force.

No branch earned a rating better than “marginal” in their conflict preparedness.

The recently released 2019 edition of the index shows a slight bounce-back, featuring increases in readiness levels and investment in modernization efforts.

The prior decline is largely reflective of the level of funding for the Department of Defense. Appropriations for the Defense Department from 2011 to 2016 had been largely inadequate to maintain the necessary capabilities to fulfill the mission we ask of our armed forces.

The Bipartisan Budget Act, despite its multiple flaws, has set a positive trajectory in 2018 and 2019 for our military.

But in the same way that the military did not diminish its readiness levels in one year, it will take more than a couple of years to restore our military readiness.

In June 2017, the chairman of the Joint Chiefs of Staff, Gen. Joseph Dunford, told Congress that the defense budget would require 3 percent growth above inflation until 2023 to maintain our current “competitive advantage.”

Despite his alert, the executive branch’s defense budget projections for 2019 through 2023 feature inflationary growth, below the mark described by Dunford.

A deteriorated military jeopardizes more than our wartime capability. It also affects our diplomatic effectiveness.

William Imboden, a University of Texas professor of national security with practical experience, argued before the House Armed Services Committee at that same hearing that “a strong military preserves the open lanes of global commerce and finance for the American economy.”

International trade routes are a good example of those effects, as the preservation of those routes depend upon the threat of punitive action against any who may seek to dismantle them.

The best modern example of military action to preserve global commerce is the U.S. Operation Enduring Freedom/Horn of Africa as a component of NATO’s Operation Ocean Shield.

The operation began anti-piracy efforts in 2005 to combat the surge of piracy occurring around the Horn of Africa, particularly by Somali actors. This trade route survived only through military intervention. (Interestingly, the Navy was first created to fight pirates that threatened American merchants in the Mediterranean.)

Imboden also asserted that a strong military “makes us more attractive to potential allies and partners.” NATO is great example of that.

The treaty establishes assured mutual defense among its members. These types of commitment would not be credible without U.S. military prowess. U.S. military strength will continue to be a driving factor in similar treaties only if we retain our military superiority.

The preservation of peace through deterrence is the ultimate motivator for military development. A weak military would invite threatening nations to flex their muscles and infringe upon U.S. interests without legitimate fear of resistance.

A strong U.S. military serves as a deterrent for conflict, but unless the military’s capabilities are maintained, the United States’ ability to maintain peace will be nullified.