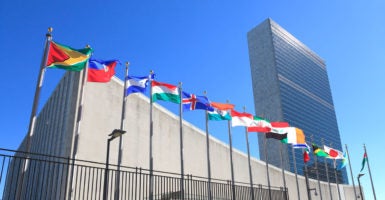 Grace Melton writes that the U.S. must "oppose efforts to promote abortion wherever they occur in the U.N.’s various bureaucracies and programs." (Photo: mizoula/Getty Images)

With another session of the United Nations General Assembly underway, the U.S. has a number of opportunities to advance U.S. interests and to protect life and religious liberty, especially as the Third Committee—responsible for social, humanitarian, and cultural affairs—convenes.

In promoting U.S. foreign policy at the U.N. and through its many agencies, U.S. policymakers seeking to defend life and liberty ought to be mindful of looming challenges that could affect Americans’ rights.

Insofar as U.S. taxpayers pick up 22 percent of the U.N.’s total budget, by far the biggest share of any country, it should give special consideration to U.S. concerns.

While this is a necessary first step for the U.S. in protecting life in its foreign policy objectives, there’s more that can be done to protect the unborn and to improve maternal and newborn health.

A critical component of that is to oppose efforts to promote abortion wherever they occur in the U.N.’s various bureaucracies and programs.

To mark the so-called “International Safe Abortion Day”—itself a sinisterly euphemistic notion—a group of U.N. human rights “experts” called on all countries of the world to legalize abortion and to promote sexual and reproductive rights for all women and girls.

The language of “sexual and reproductive health and rights” is U.N.-speak for access to abortion, and is used by U.N. bureaucrats and liberal international nongovernmental organizations such as Planned Parenthood International and the Marie Stopes Foundation to direct humanitarian aid and development assistance to abortion providers.

The U.N. Human Rights Council—which the U.S. quit in June—just adopted its biannual resolution on “Preventable Maternal Mortality and Morbidity and Human Rights,” and in a troubling departure from previous resolutions, the qualifying language that pro-life delegations always insisted be included to specify that “reproductive rights” not be interpreted to override national laws regulating or banning abortion was left out.

That could serve as a dangerous precedent for forthcoming negotiations over sexual and reproductive health language in the U.N. General Assembly, and the U.S. must be on guard to prevent a further expansion of abortion language in U.N. documents.

As has been the case in the U.S., where the pursuit of legal protections on the basis of one’s sexual orientation or gender identity often results in restrictions on, or threats to, individuals’ religious liberty or expression, similar conflicts are increasingly coming to the fore within the U.N. system.

Policies based on sexual orientation or gender identity, both in the U.S. and internationally, are often used to attack or silence those who hold traditional religious beliefs.

In the West, prosecutions of religious leaders for so-called “hate speech” on the basis of sexual orientation or gender identity are threatening freedom of religion and speech.

The European Court of Human Rights recently upheld a “hate speech” conviction in Sweden, and now the U.N.’s independent expert on sexual orientation and gender identity has called for every government in the world to adopt anti-hate speech legislation and to make special efforts to hold political and religious leaders “accountable.”

These legal actions typically attempt to compel all citizens to affirm the state’s views, rather than following their own consciences.

At a recent high-level event hosted by the U.N.’s LGBTI Core Group, the U.N.’s new high commissioner for human rights, former Chilean President Michelle Bachelet, said, “There should be nothing ‘controversial’ about stopping people being murdered, or executed by agents of the state, simply because of who they are or whom they love.”

Few would disagree with that. Individuals who identify as LGBT in many parts of the world do experience real violence and threats to life and limb. Such violence can and should be condemned under existing international law and human rights treaties, but equating alleged discrimination with violence ultimately does a disservice to those victims of violence.

Being unjustly imprisoned, tortured, or killed because of one’s sexual orientation or gender identity is categorically different from whether or not a government redefines marriage to include same-sex couples or whether one has their sexual identity or sexual choices affirmed by others.

The policy of the U.S. must be to protect the human rights of all individuals based on human dignity, not on membership in particular identity groups.

The U.N.’s Third Committee will soon hear the report of the independent expert on violence and discrimination based on sexual orientation and gender identity, as well as one from the special rapporteur on freedom of religion or belief.

In these Third Committee sessions, as well as all other U.N. forums, the U.S. ought to prioritize measures to safeguard the values of life and liberty for all individuals.

The U.S. must be consistent in its rejection of the term “sexual and reproductive health” and similar language that is used to promote abortion and to pressure developing countries into liberalizing their abortion laws.

The U.S. must also endeavor to avoid the divisive human rights conflict that has emerged between LGBT advocates seeking to create rights based on sexual orientation and gender identity and those who hold traditional beliefs, often rooted in their religious convictions.

An emphasis on respecting the dignity of each individual is the clear way forward to affirm human rights for all.