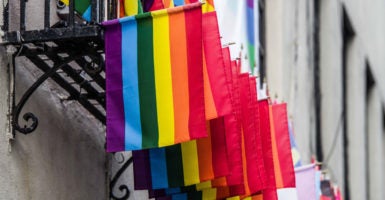 A dangerous alliance between United Nations bureaucrats and LGBT activists poses a new danger to free speech, free exercise of religion, and parental rights—not just for Americans but for people around the world.

Under the leadership of Secretary of State Mike Pompeo and Ambassador Nikki Haley, the Trump administration should strengthen protections of the fundamental human rights of Americans that are guaranteed in the U.S. Constitution and international treaties.

That would mark a significant break from the approach of the Obama administration, which joined forces with a handful of Western nations, the U.N. bureaucracy, and progressive activists to push policies based on rapidly changing ideas about sexual orientation and gender identity.

They did so with zero authority: None of these concepts are contained in any of the international treaties that the U.N. is authorized to enforce.

Now these policies are threatening to cost our rights—and the U.S. could foot the bill. The U.S. is responsible for 22 percent of the United Nations’ total budget and contributed $10 billion to the U.N. in 2016 alone.

American taxpayer money should not go toward an illiberal agenda that could undermine fundamental human rights.

One of the most egregious examples of bureaucratic overreach occurred in the U.N. Office of the High Commissioner for Human Rights.

Rather than focus on the U.N. General Assembly’s mandate to “promote and protect” the effective enjoyment of fundamental human rights that are in the texts of treaties, this U.N. office launched the Free and Equal campaign.

This highly visible and well-funded global campaign aims to socialize same-sex marriage, criminalize so-called “hate speech,” and normalize transgender ideology, even though the terms sexual orientation and gender identity are not in the text of any U.N. treaties.

This campaign is not only a massive overreach by U.N. bureaucracy, but it threatens to silence public debate on controversial topics like marriage and sexuality throughout the world.

Unfortunately, this campaign is just the beginning. Charles Radcliffe, Free and Equal’s founding director, has stated that a dozen U.N. agencies have made public commitments to advance sexual orientation and gender identity policies in individual member states and that more than 100 countries have implemented changes in their domestic laws in response to U.N. sexual orientation and gender identity recommendations.

Who pays for this bureaucratic overreach? Well, the U.N. Office of the High Commissioner for Human Rights provides a leadership and coordination role for these policies about sexual orientation and gender identity. Its annual budget was $201.6 million, with 40 percent of its funding from the U.N. Of course, the U.N. gets over a fifth of its budget from the United States. Now the U.S. must leverage its funding to bring an end to these drastic ideologically-driven policies.

Activists at the U.N. are attempting to impose their ideology in subtler ways, too. The addition of the sexual orientation and gender identity categories to interpretations of the term “nondiscrimination” in U.N. treaties may seem innocuous, but it is fraught with the potential to harm fundamental rights.

In Europe and the United States, progressives have used such nondiscrimination laws to force individuals to endorse a new sexual orthodoxy, including same-sex marriage, under threat of economic punishment.

The European Court of Human Rights upheld the United Kingdom government’s terminations of civil servants and private employees for refusing to perform services for same-sex marriages.

The United States Supreme Court is currently considering the case of a Christian cake artist whom Colorado ordered to endorse same-sex marriage by designing a custom wedding cake despite his religious objections.

The U.K. Supreme Court is hearing a similar case. None of these individuals turned someone away because they identify as LGBT; rather, the conflicts were all the result of disagreement over the definition of marriage.

No state, much less the unelected U.N. bureaucracy, should compel a person who believes that marriage is between one man and one woman to endorse something they believe is untrue because of pressure from a politically powerful identity group.

European governments that are pressing for new sexual orientation and gender identity rights at the U.N. have used their domestic hate speech laws to enforce the new sexual orthodoxy. Belgium, Spain, Switzerland, and the U.K. have launched police investigations into “hate speech” based on statements made by clergy.

The Obama administration endorsed this approach by issuing a United States Agency for International Development document, “LGBT Vision for Action,” that explicitly endorsed the dangerous concept of “hate speech.”

Even more concerning and with implications for what constitutes “hate speech,” Ban made it clear that opposition to same-sex marriage is rooted in “homophobia.”

This is simply untrue. Reasonable people of good will have held the belief that marriage is between one man and one woman for thousands of years. There is nothing inherent to this belief that necessitates bigotry.

People should be free to hold a traditional view of marriage without punishment.

Sexual orientation and gender identity ideology has implications for families, too.

This ideology directly conflicts with the fundamental right of parents to educate their children in accordance with their religious and moral beliefs as protected by Article 18 of the International Covenant on Civil and Political Rights.

In the U.S. and other nations, Orthodox Jews, Christians, and parents of other faiths have balked at government efforts to teach their children transgender ideology. The best science, medicine, and psychology do not support the treatment of gender dysphoria with the socialization, hormone therapies, and surgeries that the transgender community advocates.

Despite this, activists at the U.N. continue to pursue a radical agenda even at the cost of family integrity and parental rights.

In every case where sexual orientation and gender identity ideology conflicts with the established rights to freedom of religion, free speech, and parental rights, the U.N. bureaucracy treats the fundamental human right as an obstacle to the ideology rather than the other way around.

The U.N. bureaucracy has it backward. If it can downgrade one fundamental human right because of one cultural orthodoxy, what is to stop it from downgrading other rights to promote other ideologies?

The Trump administration should reject the U.N. and activists’ attempts to impose extremist ideology through bureaucratic overreach that will affect people all over the world.

The U.S. should lead at the U.N. by supporting the fundamental rights of all individuals that sovereign member states of the U.N. have recognized in treaties.