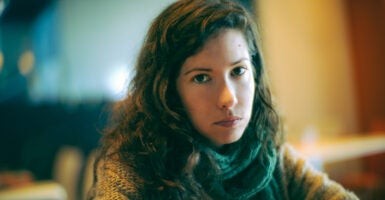 Economists’ wildly inaccurate reaction to the Supreme Court’s decision on abortion Friday in Dobbs v. Jackson Women's Health Organization should lead us to take a closer look at how sober and rational these academic experts really are. (Photo illustration: Rafael Elias/Getty Images)

Adam Kissel is senior fellow of the Cardinal Institute for West Virginia Policy and a visiting fellow on higher education reform at The Heritage Foundation.

Economists tend to believe that they deserve deference on a broad range of public policy questions that involve much more than economic analysis. They often say they are guided by reason and science.

But economists’ wildly inaccurate reaction to the Supreme Court’s decision Friday in Dobbs v. Jackson Women’s Health Organization should lead us to take a closer look at how sober and rational these academic experts really are.

A group of economists insists that the planned academic conferences of the American Economic Association be moved from Louisiana in 2023 and Texas in 2024 because bans on abortions in those states will put their lives in danger.

In a petition these economists are circulating online, they are not primarily calling for the conferences to be relocated as a political symbol or an economic boycott. Rather, they claim, Louisiana and Texas have a “restrictive abortion ban that will limit pregnant women’s access to necessary medical care in the event of pregnancy complications.”

As a journal editor and leading economist at the University of Chicago declared, professional associations “must act to ensure that no one who is pregnant is obliged to travel to a location where their health or safety is endangered by antiabortion legislation.”

Why do they believe that lives would be at risk? An account by one “brave economist” described her miscarriage and infection that required an emergency room visit to remove the deceased fetus by the same procedure that is sometimes used to abort a live fetus.

“What if I had been at the [American Economic Association conference] in New Orleans for these experiences?” she wonders with alarm. “We cannot keep pregnant people from this important professional event, nor should we ask them to risk their lives to attend.”

Other economists who are women began sharing their stories of miscarriages online, leading one Ivy League economist to conclude that the Supreme Court ruling in Dobbs constituted a common threat to their health: “Hey #EconTwitter, raise your hand if you’ve been pregnant at the AEAs before. This is not rare, and MANY people will be excluded from participating in the keystone event of our profession if the meetings in LA and TX go forward.”

The Association for Education Finance and Policy already has issued a statement indicating that the group is considering moving its planned conference.

The economists’ rhetoric has gotten so hysterical that one Texas-based economist offers reassurance that her field’s expertise in planning can handle the problem: “Luckily, economists are comfortable w[ith] tradeoffs and w[ith] designing tax/fee structures that ensure costs are borne by those better-positioned to shoulder them.” She adds that one “good idea” for addressing the problem is that “the AEA could purchase a conference-only Medevac policy.”

Ideas like this remind us why writer and commentator William F. Buckley once remarked: “I would rather be governed by the first 2,000 people in the Boston telephone directory than by the 2,000 people on the faculty of Harvard University.”

Unfortunately, all of this hoopla is based on a failure to actually read and understand state laws banning abortions. None of them prohibits treatment of miscarriages, even when using the same procedures that also could be used for abortions.

As even NPR’s coverage of the issue acknowledged: “John Seago, legislative director for Texas Right to Life, described this … as ‘an awful misunderstanding of the law.’ … Texas law stated that the act is not an abortion if it involves the treatment of an ectopic pregnancy—which most commonly occurs when the pregnancy grows in the fallopian tube—or to ‘remove a dead, unborn child whose death was caused by spontaneous abortion.’”

In addition to exempting the treatment of miscarriages from any abortion ban, state laws also provide exemptions when the life of the mother is in danger.

But never mind the facts. Just believe our scientific betters as they demonstrate their rationality with a complete emotional meltdown.