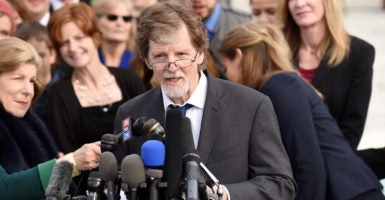 Jack Phillips, owner of the Masterpiece Cakeshop, is confronting yet another struggle with the state of Colorado.

This time, the state is investigating the Christian baker for declining to bake a gender transition cake that is pink on the inside and blue on the outside.

The Colorado Civil Rights Commission, which lost in a 7-2 decision in the Supreme Court this June, informed him it was investigating the transgender cake complaint.

“The Civil Rights Commission held on to that complaint until after the court’s decision,” Phillips said Friday at the Values Voter Summit. “A few days later, they were suing me again. Same thing, just different cake.”

Phillips calls himself a cake artist and that’s why he named his shop Masterpiece Cakeshop.

“Masterpiece says art, cake says cake, so you know you’re not going in just to get a loaf of bread,” he said.

Phillips was willing to sell both the same-sex couple and the transgender person a cake in the shop, just not willing to create a cake with a message that violated his faith. He said his shop also does not bake Halloween cakes, anti-American cakes, or anti-LGBT cakes.

He recalled to the crowd when the gay couple came to his shop for what turned into the Supreme Court case.

“I knew this was not a cake I could create because I believe marriage is between a man and a woman,” Phillips said.

They both got up and were angry and stormed out of my shop, flipping me off and swearing at me. … I would never turn away a gay couple. They asked me to create a cake I couldn’t create.

After this he got hateful emails, death threats, and protests outside his bakery.

Phillips’ voice cracked when he recalled learning in December of 2017 that the Supreme Court would hear his case.

“The day that I learned the court granted our case … I texted my wife, I texted my daughter. I had nobody to share it with really,” Phillips said. “Nobody was in the shop except a homeless guy I’m friends with. I told him, ‘Hey, I’m going to the Supreme Court.’ He said, ‘Yeah, I got to go to court on Wednesday.’”