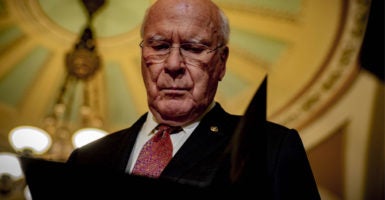 “If somebody proposes something, they’ve got to have their name on it, and we’ve got to vote on it,” Sen. Patrick Leahy, D-Vt., vice chairman of the Senate Appropriations Committee, said of earmarks. (Photo: Douglas Christian/ZUMA Press/Newscom)

Democrats are floating the idea of reinstating budgetary earmarks as a way to build support for funding the government on time, but some of their Republican counterparts are skeptical.

“I don’t know who’s going to be in the majority next year,” Sen. Patrick Leahy, D-Vt., vice chairman of the Senate Appropriations Committee, said on  C-SPAN’s “Newsmakers” program on Friday.

“Obviously, I hope Democrats are. But whoever it is, I want to continue to do this,” Leahy said, speaking of the bipartisan comity the Senate has fostered for the fiscal 2019 budget process. “We can do it if we want to.”

Earmarks, which were banned under House rules in 2010, allow taxpayer money to be directed to special interests and projects in members’ districts through the budget.

“If somebody proposes something, they’ve got to have their name on it, and we’ve got to vote on it,” Leahy said. “But I’ve never understood why the Congress has the power of the purse, we won’t really say how it’s spent. We’ll just turn this over to whoever’s in the White House, Republican or Democrat.”

A pair of Republican lawmakers who serve with Leahy on the Senate Appropriations Committee aren’t as supportive of bringing earmarks back.

“With our national debt surpassing $21 trillion, Congress needs to focus on cutting wasteful and unnecessary spending, rather than finding new ways to spend money,” Sen. Jeff Flake, R-Ariz., said in a statement provided to The Daily Signal, adding:

In order to get your pet projects, you have to accept those of your colleagues—no matter how ridiculous they might be.

I offered countless anti-earmark amendments in the House that failed and witnessed the Senate’s overwhelming vote to spend hundreds of millions of dollars building the ‘Bridge to Nowhere’ in Alaska, proving that transparency alone is not enough to stop senseless spending.

A  spokeswoman for Sen. Steve Daines, R-Mont., who also serves on the Appropriations Committee, told The Daily Signal in an email that her boss “has long opposed earmarks.”

“He believes they are a product of backroom deals and promote a culture of corruption,” she said.

A Democratic leader in the House also supports resurrecting the practice.

“Republicans eliminated earmarks altogether, and the result has been an abdication of Congress’ power of the purse,” House Minority Whip Steny H. Hoyer, D-Md., said Sept. 12.

But Rep. Mark Meadows, R-N.C., chairman of the conservative House Freedom Caucus, said in a statement provided to The Daily Signal that reinstating earmarks would be the wrong way forward.

“In the past, earmarks have led to a culture of more spending and less accountability in Washington—and it’s difficult to imagine it would be any different now,” Meadows said. “Reinstating earmarks would not be a consistent policy with the ‘drain the swamp’ initiative Americans voted for.”

Justin Bogie, a senior policy analyst in fiscal affairs at The Heritage Foundation told The Daily Signal in an email that reinstating earmarks would be irresponsible.

“Now is not the time to reverse the earmark ban,” Bogie said. “Until strong fiscal restraints are in place, doing so would be asking for uncontrolled wasteful spending and could usher in a new era of political corruption.

“Congress should focus on more effective reforms to fix the broken budget and appropriations process before it even thinks about bringing earmarks back,” he said.