Sen. Mike Lee Explains Why the Senate Has the Filibuster and Why It Would Be a Mistake to Abolish It 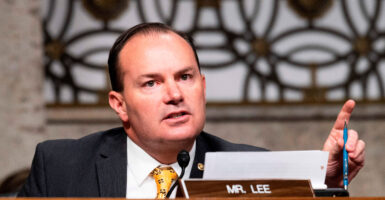 Sen. Mike Lee, R-Utah, seen here at a Senate Judiciary Committee hearing on Nov. 17, warns of the far-reaching consequences of the abolition of the filibuster, as advocated by some liberals and Democrats. (Photo: Bill Clark/Agence France-Presse/Getty Images)

Now that Democrats have President Joe Biden in the White House and narrow majorities in both houses of Congress, some on the left argue that it’s time to get rid of the Senate filibuster.

The Senate filibuster rule often slows down legislation and makes it so that 60 votes are required to pass bills, rather than a simple majority.

Sen. Mike Lee, R-Utah, appeared on a Heritage Foundation online event to explain why the Senate has the filibuster, why it has been an overall benefit to the country, and why eliminating it would be a mistake with disastrous consequences.

It’s a way to protect the rights of the minority within a legislative body, Lee said. Those on the left view abolishing the filibuster—which they view as an anti-democratic impediment to progress—as a total win with no trade-offs or downsides.

“The filibuster itself, while not commanded by the Constitution, is within the Senate’s authority under Article I of the Constitution to adopt a set of rules regarding the parliamentary procedure of each house,” the Utah lawmaker said. “And the filibuster itself is often misunderstood. It’s something that was designed from the outset to allow for unlimited open debate and discussion.”

A century ago, the Senate began to clamp down on this speaking time, adopting a “cloture rule” that “allows for a supermajority of senators to shut down debate.”

The cloture rule used to require two-thirds majority (67 votes in the 100-member Senate) to achieve. Now, it requires a three-fifths vote, or 60.

The process of eliminating the filibuster, Lee explained, would require a simple majority. That would work by either doing away with the rule entirely, or simply creating a shortcut around it.

There are currently ways around the filibuster under the budget reconciliation process. It was the method Democrats used to pass Obamacare by a majority vote in 2010.

It allows the Senate, within a narrowly confined set of rules, to pass a budget by simple majority.

Lee warned that those on the left who regard the elimination of the filibuster as entirely positive are mistaken:

The filibuster itself is a good thing, and it’s a tool for both sides, one that encourages both sides to come together and try to come to a consensus in compromise.

The truth is that it’s not that hard to pass bills or get things done in the Senate when we use the tools that are available to debate, and amend, and to compromise—and when the bills are not one-sided and ideologically aggressive.

The only reason to abolish the filibuster is to allow the Senate to pass more bills that don’t have bipartisan support.

Lee said abolishing the filibuster would be a disaster for the left, right, and center.

The Utah Republican said much of the conservative legislative agenda—such as defunding Planned Parenthood, building a border wall, regulatory reform, and eliminating an array of federal programs—would suddenly be on the table with a single red-wave election. But the process itself would be bad for the country, as all gains would be short term and could be undone as soon as the other side took power. That would only make the country more fractured.

With the elimination of the filibuster, there would be no incentive to build consensus coalitions and the Senate would sink to “a more toxic level.”

The Senate, from the time of the country’s founding, Lee said, was intended to be a deliberative body that would slow things down and allow emotions to cool. The filibuster helps preserve that.

Lee also warned that there could be efforts that don’t outright abolish the filibuster, but that would undermine its function. One way would be to change the so-called Byrd rule, conceived by the now-deceased Sen. Robert Byrd, D-W.Va., which establishes what can and cannot be passed through the budget reconciliation rules.

Those sorts of efforts would essentially be a “tactical nuke,” Lee said, and would ultimately be little different than abolishing the filibuster outright.

While he insisted that getting rid of the filibuster would be bad for the country, Lee did bring up ways to make the filibuster better serve the Senate and the American people.

He said there has been a problem with how the filibuster has been applied. The point was to allow senators to speak freely and as long as they wanted, but it often operates as a “heckler’s veto” for 41 senators, Lee said.

Other rules can be employed, he said, to ensure that the filibuster doesn’t get used in an “excessively dilatory fashion.”

Lee said that would be a much better way to reform the system, rather than tear it down.