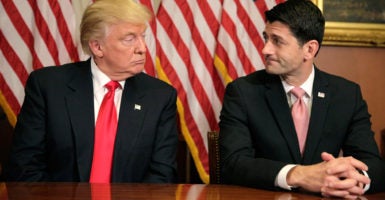 Conservative lawmakers and groups are speaking out in opposition to a House Republican proposal to revive the practice of earmarking in the next Congress.

Earmarks are congressionally directed spending to a special interest. They’ve been banned under House rules since 2010. But on Wednesday, three GOP lawmakers plan to offer an amendment to those rules allowing them once again.

The vote will be conducted by secret ballot during a closed-door meeting of House Republicans, leaving conservatives fearful that the amendment could be adopted.

The Daily Signal obtained a copy of the amendment Monday night. Since then, several lawmakers have voiced their opposition to the plan while conservative groups rejected the gambit.

“If there was one unifying message in this year’s election, it was that voters are sick and tired of how Washington does business,” Sen. Mike Lee, R-Utah, said in a statement to The Daily Signal. “It would be a violation of our promise to the American people if we went back to this corrupting practice.”

Sen. Jeff Flake, R-Ariz., who as a House member highlighted an “egregious earmark of the week,” derided the attempt to bring them back.

“Like indigestion, the desire for earmarks keeps coming back up,” Flake told The Daily Signal. “Let’s face it. If we’re trying to bring our popularity out of the basement, the last thing we need to do is indulge in more wasteful spending.”

Rep. Jim Jordan, R-Ohio, told The Daily Signal he would oppose the amendment.

“The takeaway from last week’s election is that the American people are tired of business as usual in Washington,” said Jordan, who is chairman of the House Freedom Caucus. “That means come January, no earmarks or other special deals for special interests, period.”

The new GOP proposal is sponsored by Reps. John Culberson of Texas, Mike Rogers of Alabama, and Tom Rooney of Florida. The Daily Signal contacted each office for comment, but they did not respond.

If the amendment is adopted Wednesday, lawmakers would be able to request earmarks once again as long as the sponsoring member is identified, the earmarks initiate in committee, and they don’t increase spending.

During the early 2000s, when Republicans controlled Congress and the presidency, earmarks came to symbolize wasteful government spending and pork-barrel projects such as the “Bridge to Nowhere” in Alaska. They also played a role in former GOP Rep. Duke Cunningham’s bribery case. Cunningham, who spent time in prison, used earmarks in exchange for lobbyists’ gifts. Coming just days after the election of Donald Trump, who campaigned on a promise to “drain the swamp,” several conservative leaders said the move to bring back earmarks sent the wrong message to voters.

“Any member of Congress who votes to bring back old-school, backroom, pork-barrel spending through earmarks is putting himself or herself firmly against the American people who just elected Donald Trump president, as he campaigned emphatically on the issue of draining the swamp in Washington,” she told The Daily Signal.

“Like indigestion, the desire for earmarks keeps coming back up. Let’s face it. If we’re trying to bring our popularity out of the basement, the last thing we need to do is indulge in more wasteful spending.” —Sen. Jeff Flake, R-Ariz.

“Americans are tired of politicians in Washington using their power to rig the system for special interests,” Cuccinelli said.” This kind of cronyism, which is at the very heart of the earmarking process, is exactly what Americans rejected at the polls this year. It would be a major mistake for Republicans to bring back earmarks as their first act after the elections. It would be a slap in the face to the millions of Americans who just voted to drain the swamp.”

Andy Koenig, vice president of policy at Freedom Partners, called on lawmakers to “flatly reject any effort to reinstitute earmarks.”

“Bringing back the earmark process that corrupted Washington for decades would be a direct insult to millions of Americans who signaled last week that they’re tired of lawmakers putting special interests ahead of taxpayers,” Koenig said. “Hardworking Americans want their tax dollars spent wisely and transparently.” FreedomWorks CEO Adam Brandon encouraged Republicans to pursue a bold conservative agenda rather than be bogged down by the taint of earmarks.

“It’s incomprehensible that House Republicans, a week after voters sent a strong message to the Washington political establishment, would bring back earmarks—the currency of corruption,” Brandon said. “Earmarks became synonymous with cronyism and corruption in Congress, with Members handing out funding for the politically connected, and House Republicans were right to ban the practice in the first place.”

This is, however, the first time House Speaker Paul Ryan, R-Wis., will face a vote on earmarks under his leadership. Ryan’s predecessor, former Rep. John Boehner, was a staunch opponent of earmarks.

“As long as I’m speaker, there will be no earmarks,” Boehner declared in an anti-earmark video from 2014.

Since then, some lawmakers have tried to ban the practice permanently. Reps. Jim Cooper, D-Tenn., and Mick Mulvaney, R-S.C., introduced the Earmark Elimination Act last year. It called for a permanent ban of legislative earmarks.

“Earmarks are what folks hate about politics—wasteful spending for Congress’ pet projects,” Cooper said at the time. “There is a lot of talk about bringing earmarks back, but that’s just rewarding Congress for bad behavior. It’s time to crack down and ban earmarks forever.”