Michigan State Football Star’s Next Uniform Will Be USAF’s, Not NFL’s 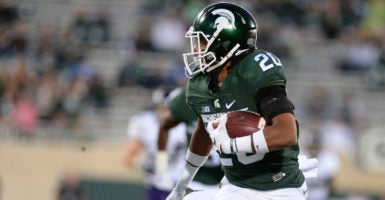 Many college football players dream of achieving fame and fortune in the NFL, but Jalen Watts-Jackson, a star defensive back who made the Michigan State University record books, has a different set of goal posts in mind.

Watts-Jackson told an MSU athletics blog, Spartan Nation—on the Fourth of July, no less—that he intends instead to join the U.S. Air Force.

His decision to do so comes as the debate over some NFL players “taking a knee,” rather than standing, during the national anthem has burst back into the news with the approach of the 2018-19 NFL season.

He has “been playing football for a long time, and it’s always been a dream,” Watts-Jackson said of the notion of turning pro in a July 9 Fox News interview. “I started to put my goals over my dreams, and my goal is to overall be successful in something I love doing every day, and I feel like the Air Force will give me an opportunity to do so and get a good career going for myself, as well.”

Watts-Jackson, who hails from Detroit, rose to fame in college football after clinching a 27-23 upset victory over MSU’s longtime rival, the University of Michigan, on the latter’s home turf in October 2015, when the then-redshirt freshman grabbed a fumbled Michigan punt and ran for a 38-yard touchdown as time expired.

“[T]he unforgettable touchdown was named the No. 1 play in college football history in a story published on NFL.com on Oct. 19, 2015,” according to MSUSpartans.com, the official website of Spartan athletics. “[I]t also was named the No. 1 play of the 2015 season at the ESPN College Football Awards Show in Atlanta on Dec. 10, and ESPN Sport Science named it the Newton Award winner for ‘Most Improbable’ Play of the Year in 2015.”

After graduating from MSU in May with a degree in advertising, Watts-Jackson is joining the Air Force instead of continuing into his final year of NFL eligibility as a graduate transfer, an NCAA athlete who is completing a graduate level or second-degree course and has not played four seasons within five calendar years.

His decision to join the Air Force wasn’t as difficult as most people might think, Watts-Jackson told Fox News. He has a history of family members who have served in the military, including his father, Rick Jackson, who was in the Marine Corps and, later, the Army.

“I got to talk to … my cousin Paul, who was also in the Army, and we just got to talking about, you know, the future and the goals I have for myself, and things I wanted to do with my life,” Watts-Jackson said. “I got to weigh out all of my options … . I spoke to God about it, and he gave me an answer quick, and so, I went with it.”

When considering would-be recruits, those with athletic backgrounds are desirable, an Air Force Recruiting Service spokeswoman told The Daily Signal in an email.

“Whether [Watts-Jackson] chooses to come in as an officer or an enlisted member will determine how the [transition] process works for him,” said the recruiter, who asked not to be identified. “But no matter what he chooses, if accepted, transitioning into the U.S. Air Force is not difficult. Airmen are taught the basics of military customs, courtesies, drill, and marching at initial training.”

Right now, Watts-Jackson has his sights set on cyber-systems operations and security within the Air Force and is currently taking classes to become certified in computer security.

Of the between 27,000 and 32,0000 people who join the Air Force each year, it’s uncommon for a celebrity or a prominent athlete to join, the Recruiting Service spokeswoman said.

“I feel like … people look into it as ‘You got this great opportunity,’” Watts-Jackson said. “They look at college athletes—and athletes—as ‘superstars’ or … ‘celebrities’ sometimes, and they feel like you are giving up this dream on being this super-celebrity or super-rich. But I think fighting for this country and fighting for this nation is just as important.”