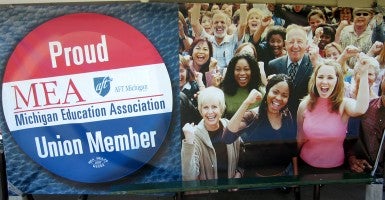 Rob Wiersema teaches high school economics, and he knows the merits of a simple cost-benefit analysis.

Leaving the Michigan Education Association, he surmised, made economic sense. He had found another professional association that offered better benefits at a lower cost.

But his simple economics become complicated. The union didn’t want him to go.

In December 2012, Michigan passed a right-to-work law, which allowed teachers and other workers to keep their jobs without belonging to the union. Until then, union membership was all but a requirement for employment.

“I thought, great, I’m out,” Wiersema said. “As soon as I heard you could leave, I thought, great. My contract is up in 2013. I sent letters to the MEA and the local association to say I quit, but it obviously didn’t work.”

He called the union and sent letters asking how to leave, but he got no reply. In June, he sent a “quit letter” to the state and local branches and the school. In July, union dues showed up on his credit card.

He disputed the charge and said he wasn’t going to pay. Then, he heard the union was going after people who didn’t pay it “and have their credit reports take a hit.”

The union contends teachers can leave in August only. As for teachers who did not opt out during the narrow window in August, “They’re sending a collection agency after them,” said Vincent Vernuccio, director of labor policy for the Mackinac Center for Public Policy.

Lisa Jelenek, who retired this spring after 40 years of teaching, and some of her co-workers chose not to re-join the union for the 2013-14 school year, the first year right-to-work applied. They didn’t know about the August window until too late.

“Early September, we got an e-bill statement from the union treasurer, the dues statement for the year,” Jelenek said. “We said, ‘What? We’re not joining.’ We found it very convenient that we got it right at the beginning of September, when all the powers that be knew we had to do something in August.”

The union was did not return calls for comment.