Why the LGBT Alliance Could Be on the Brink of Schism 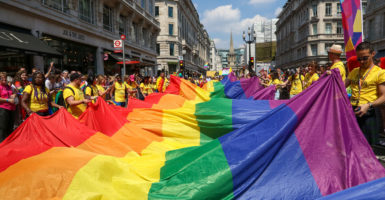 Events at the July 7 Pride in London parade revealed deepening fractures that could lead to a schism in the LGBT community.

A group of eight lesbians interrupted the parade to protest the inclusion of transgender individuals in the LGBT community.

One protester shouted, “A man who says he’s a lesbian is a rapist,” referring to a man who identifies as a woman. The Daily Wire cited a flyer shared by anti-transgender lesbians that read, “The trans movement is … coercing lesbians to have sex with men. We firmly condemn this vicious form of anti-lesbianism disguised as progress.”

The disruption was a demonstration by the “Get the L Out” campaign, which organizers describe as “a group of lesbian and feminist individuals and organizations, opposing the increasingly anti-lesbian and misogynistic LGBT movement and the erasure of lesbians.”

The organizers of the Pride in London parade scrambled to issue an official apology, denouncing the protesters’ message in the days following the parade and calling the protest a demonstration of “bigotry, ignorance, and hate.” Adversaries labeled the protesters and others like them TERFs (trans-exclusionary radical feminists), a term the feminists consider a slur.

Kick out the transphobes leading the parade

There's no space for transphobia at Pride. If you can't support THE WHOLE COMMUNITY then stay home.

There would be no Pride without trans women. There is only shame when transmisic bigots continue to hijack the queer community for their own hateful ideology #PrideInLondon

The episode highlights the unrest between the LGB and T parts of the conventional acronym, but the tension is nothing new. Tremors of disunity existed ever since the two parties unified in 1988 and first came to a head in 2007 when LGBs were willing to drop Ts from the Employment Nondiscrimination Act to get it through Congress.

The transgender activists’ uproar caused the term “gender identity” to be readmitted to the list of protected categories in the legislation. However, it was only a surface-level remedy; the disunity quietly festered.

It resurfaced during the legal battle over students who identify as transgender who want to use sex-specific facilities, such as bathrooms, that were opposite from their biological sex.

During the bathroom controversy, some lesbian, feminist, and conservative groups partnered to highlight the many problems in allowing members of the opposite sex into a school bathroom, locker room, dorm room, or other sex-specific facility.

The Women’s Liberation Front, a progressive feminist group, and Alliance Defending Freedom, a Christian legal defense group, partnered to file an amicus brief in the court case Gloucester County School Board v. GG, the central case in the bathroom debate here in the United States.

In February 2017, The Heritage Foundation held a panel discussion titled Biology Isn’t Bigotry: Why Sex Matters in the Age of Gender Identity.

The panel was composed of four women, two of whom supported LGB causes but disagreed with certain aspects of the transgender agenda. One panelist, Miriam Ben Shalom, stated, “Transgender issues are not our [LGB] issues.” Regarding the term “gender identity,” Shalom stated, “Biology isn’t bigotry. Biology is the truth.”

One group of LGB members, “Drop the T,” suggested that “the transgender community needs to be disassociated from the larger LGB community.” Among other reasons, the group cites the “vilification” of LGB individuals who disagree with the transgender movement, such as calling them “transphobic bigots,” as one of the primary reasons for their petition to split from the transgender advocates.

Another concern for Drop the T is the privacy and safety of women in sex-specific facilities, which would be made accessible to biological males under gender identity policies.

The group also references the serious implications of radical gender-affirming therapies for kids, including puberty blockers and cross-sex hormones for children as young as four.

LGB groups are not the only ones calling for a split. Metro, a U.K.-based news outlet, published an article in which a transgender individual advocated separating the T.

The author argues, “Forms ask you if you’re heterosexual, homosexual, bisexual, or transgender. But [transgender is] not a sexuality. It’s a gender. It makes no more sense being included with LGB than if you were to add ‘female’ in there.”

The author continues, “Sexuality and gender are not the same thing and are independent of one another.”

The Independent ran a similar article by another transgender individual who writes, “The simple point that everyone seems to be missing here is that being transgender and being gay are two entirely different things and they should never be confused.”

These articles and the protest at the London Pride parade strongly suggest that the alliance between the LGB and T communities is weakening and may even come to an end.

Only time will tell.