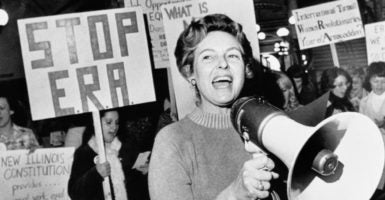 Phyllis Schlafly was one of the most influential women of the second half of the 20th century, playing a key role in the 1964 Republican presidential nomination of Sen. Barry Goldwater of Arizona, helping to found the powerful pro-family movement in the early 1970s, and heading STOP ERA, which defeated the liberal establishment’s all-out effort to pass the Equal Rights Amendment.

I’m reminded of all this by “Mrs. America,” a nine-part miniseries set to begin streaming April 15 on Hulu. Oscar winner Cate Blanchett stars as Schlafly in the drama about the fight over the ERA.

As a young woman during World War II, Schlafly worked as a ballistics gunner and technician at the largest ammunition plant in the world.

She graduated Phi Beta Kappa from Washington University and received a master’s degree from Radcliffe. She obtained her law degree while in her 50s, and wrote more than 20 books on politics, nuclear weapons, U.S. foreign policy, and the Constitution.

She was a strong Roman Catholic and a staunch anti-communist. She was an eloquent speaker and formidable debater who never lost her smile or an opportunity to score a point against an opponent.

She was a mentor to thousands of women, an indefatigable organizer who founded the Eagle Forum, a grassroots organization of conservative women at the center of every conservative battle for the past five decades.

In 1964, she wrote and self-published the classic political manifesto “A Choice Not an Echo,” which recounted how liberal Republicans had dominated the party’s presidential nomination process for decades and declared that now was the time for conservatives to nominate a conservative—Goldwater—who would draw long-ignored voters to the polls.

In the critical California Republican primary, a half-million copies of “A Choice Not an Echo” were distributed throughout the state. Goldwater narrowly defeated Gov. Nelson Rockefeller of New York.

Subsequent polls revealed that Goldwater beat Rockefeller in those neighborhoods that had been saturated with copies of the book. Goldwater credited his win to Schlafly’s 125-page paperback.

In the late 1960s, the women’s movement seized on the Equal Rights Amendment, long ignored by Congress, as the vehicle to bring about a gender-blind society. Warmly endorsed by the mass media, the constitutional amendment was overwhelmingly approved by Congress in March 1972.

Thirty-eight states had to ratify the ERA within seven years for it to become the law of the land. Just a year later, 30 states already had ratified the ERA, most of them without study, hearings, or debate, and passage seemed inevitable.

Enter Schlafly, who argued that the amendment would not broaden women’s rights, but rather take away the legal rights that women already had in divorce. (The STOP in STOP ERA stood for “Stop Taking Our Privileges.”)

Its enactment, she said, would be used to achieve the goals of radical feminists, such as government-financed abortion, state nurseries, same-sex marriage, and the elimination of female stereotypes in school textbooks. (How prophetic!)

More and more pro-family groups declared their opposition to the ERA, followed by Protestant and Catholic churches, as well as Jewish synagogues.

Focusing on selected state legislators in Oklahoma and Illinois, Schlafly and her smiling cohort paid personal visits, wrote letters, made telephone calls, and testified before their legislative committees.

Schlafly taught housewives and other non-professionals how to organize a letter-writing campaign and how to answer a reporter’s question in 15 seconds so he could not edit it.

One pro-ERA legislator said he would not talk to STOP ERA representatives until he received 5,000 personalized letters from constituents who said they opposed the ERA. He quickly changed his mind.

As a result of STOP ERA, Kentucky rescinded its approval of the ERA, followed by public referenda in Nevada and Florida against the ERA.

By 1978, 35 states had ratified the ERA, but five had rescinded their approvals. It was clear that the ERA could not be ratified by the seven-year deadline, so Congress extended the deadline by more than 39 months.

Sensing victory, STOP ERA kept up its lobbying until, at last, pro-ERA forces conceded defeat and the Equal Rights Amendment dropped out of sight.

On March 22, 1979, more than 1,400 conservatives filled the ballroom of the Shoreham Americana Hotel in Washington, D.C., to celebrate the death of the ERA and to salute Schlafly, the remarkable woman who had led the campaign and achieved an “impossible” victory over the collective might of the liberal establishment.

Schlafly kept on confounding the establishment until she died in September 2016 at the age of 92, still rallying her Eagles against the latest liberal scheme, still furthering the pro-life cause, and still protecting the family—always offering a conservative choice and not a liberal echo.