Beijing Doth Protest Too Much. US Arms Sales to Taiwan Are Right Thing to Do. 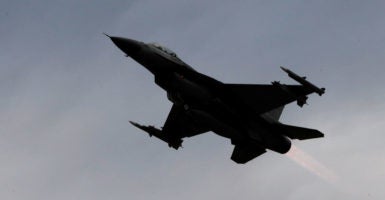 A F-16 fighter jet takes off during a military drill at Zhi-Hang Air Base in Taitung, Taiwan, on Jan. 30. (Photo: Tyrone Siu/Reuters/Newscom)

The United States on Sept. 24 announced a new set of arms sales to Taiwan. Valued at $330 million, this sale comprises mainly spare parts and equipment to support Taiwan’s air force, including its F-16s and C-130s.

This marks the second major arms sale to Taiwan by the Trump administration, following a $1.4 billion sale in June 2017 that included long-range missiles and heavy torpedoes.

The Chinese Defense Ministry spokesman warned that the U.S. move severely violated U.S.-China relations, “interfered with China’s domestic affairs and harmed China’s sovereignty and security interests, and seriously damaged China-U.S. ties, relations between the two militaries, as well as peace and stability across the Taiwan Strait.”

The arms sales announcement came not only amid another round of tariffs in the slowly escalating trade clashes between the United States and China, but also right after the U.S. imposed sanctions against the Chinese People’s Liberation Army (PLA).

Because the Chinese purchased Su-35 fighter jets and S-400 surface-to-air missiles from Russia, the U.S. announced sanctions required by the Countering America’s Adversaries Through Sanctions Act of 2017 against the PLA’s Equipment Development Department and its director, Lt. Gen. Li Shangfu.

The Chinese, meanwhile, canceled a meeting between Vice Adm. Shen Jinlong (head of the Chinese navy) and U.S. Chief of Naval Operations John Richardson with only 48 hours’ notice.

They also denied the USS Wasp access to Hong Kong for a port call. It is unclear whether these Chinese actions are more in response to the sanctions or the arms sales, or perhaps the broader deterioration of U.S.-China ties.

The new arms sales will help Taiwan maintain some semblance of credibility in its own defense, especially in the air. As China has increased its pressure on Taiwan (e.g., employing financial diplomacy to erode Taiwan’s diplomatic standing), preserving Taiwan’s ability to maintain control of its own airspace will be vital.

They are part of a larger mosaic of U.S. efforts to express support for Taiwan, including the 2018 Taiwan Travel Act, the decision of then-President-elect Donald Trump to take a call from Taiwanese President Tsai Ing-wen, and the recent opening of a new U.S. diplomatic facility in Taipei.

This is an important policy. As Taiwan’s most vital partner, the U.S. must push back against Chinese encroachment on it. If it does not, no one else will. It also upholds long-standing bipartisan precedent, set by every American president since Richard Nixon and Jimmy Carter.

Despite the Chinese Foreign Ministry’s obligatory objection to new arms sales, the United States needs to sustain the diplomatic commitments maintained by the last nine presidents.

After all, America’s one-China policy is for its policymakers, not Chinese officials, to interpret.