Pompeo Stands Up for the Iranian People in Major Speech 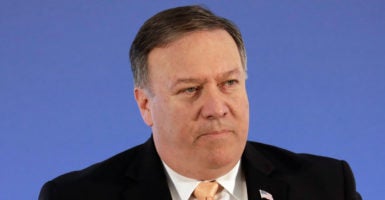 Sarah Roberts is a member of the Young Leaders Program at The Heritage Foundation.

Secretary of State Mike Pompeo gave a Reaganesque speech on Iran at the Ronald Reagan Presidential Library on Sunday.

The speech, titled “Supporting Iranian Voices,” was a powerful and clear-eyed assessment of the damaging impact that Islamist ideology and revolutionary policies have had on the Iranian people.

Addressing the Iranian people, as well as Iranian-Americans invited to attend the event, Pompeo denounced Iran’s tyrannical regime for “[forty] years of kleptocracy. Forty years of the people’s wealth squandered on supporting terrorism. Forty years of ordinary Iranians thrown in jail for peaceful expression of their rights.”

It was a message that will likely be well-received by many Iranians, especially those who were bitterly disappointed by the Obama administration’s muted response to Iran’s massive national protests in 2009. Iranian anti-regime protesters later chided the president: “Obama, Obama—either you’re with them or you’re with us.”

Pompeo’s speech centered on the frustrations and tribulations of the Iranian people at the hands of the corrupt, repressive, and criminal Islamist regime: “To the regime, prosperity, security, and freedom for the Iranian people are acceptable casualties in the march to fulfill the revolution.”

Pompeo blasted the clerical regime, which has hidden behind Islamist revolutionary slogans while siphoning off Iran’s oil wealth: “These hypocritical holy men have devised all kinds of crooked schemes to become some of the wealthiest men on Earth while their people suffer.”

In uncompromising detail, the secretary laid out the illicit economic activities of Iran’s corrupt leaders, calling them out by name, as well as by their Iranian nicknames, including the “the billionaire general” and the “sultan of sugar.”

Pompeo noted that one-third of Iranians live in poverty and a third of Iranian youth remain unemployed, while the supreme leader “Ayatollah Khamenei has his own personal, off-the-books hedge fund called the Setad, worth $95 billion.”

Pompeo explained that “because fighting the United States and destroying Israel is at the core of the regime’s ideology, it has committed and supported many acts of violence and terrorism against both countries,” including killing over 1,000 American military personnel in Iraq with Iranian-made explosive devices.

Despite this, Pompeo noted that Washington has spent years trying to identify a moderate Iranian leader that it could do business with, only to find that it is like searching for an “Iranian unicorn.”

The inconvenient truth is that Iranian moderates were purged long ago. The last vestiges of moderate leadership were crushed and imprisoned by the regime in 2009.

Ironically, Obama was AWOL during that crisis, intent on unconditionally engaging the hardliners who brutally suppressed the opposition Green Movement. As a result, there is much less hope for change in Iran today.

Promoting Freedom as an Antidote

Toward the end of his speech, Pompeo quoted President Ronald Reagan, who proclaimed in his 1982 Westminster address: “Freedom is not the sole prerogative of a lucky few, but the inalienable and universal right of all human beings.”

Pompeo deserves credit for recognizing that promoting freedom in Iran is a key antidote to fighting the poisonous Islamist ideology that has prompted the Tehran regime to take 80 million Iranian hostages and threaten its neighbors, as well as the United States.

How the U.S. Can—and Should—Promote Freedom in Iran