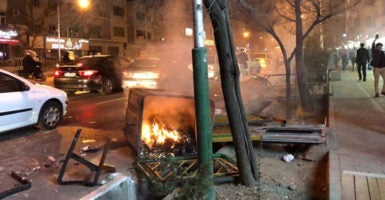 Iran has been rocked by a wave of protests against the Islamist regime since Dec. 28. Popular demonstrations ignited by smoldering resentment about Iran’s mismanaged economy quickly escalated to political denunciations of Tehran’s rulers.

President Donald Trump was quick to offer support to the protesters in a series of tweets. At 7:44 a.m. New Year’s Day, he tweeted:

Iran is failing at every level despite the terrible deal made with them by the Obama Administration. The great Iranian people have been repressed for many years. They are hungry for food & for freedom. Along with human rights, the wealth of Iran is being looted. TIME FOR CHANGE!

Early chants about price hikes have given way to increasingly bold criticisms of what the protesters see as a corrupt and repressive government that fails to meet their needs. Their demands varied.

Some chanted, “We don’t want an Islamic Republic” and “Death to the dictator,” the latter being a reference to Supreme Leader Ayatollah Ali Khamenei.

The protests apparently were triggered by a surge in prices of basic food supplies, which also had contributed to early Arab Spring protests six years ago. Protests spread quickly, sparked by social media posts, as state-controlled media blocked press coverage.

These are the largest protests since millions of Iranians flooded the streets in 2009 to protest against then-President Mahmoud Ahmadinejad’s rigged re-election. But the regime crushed those protests in a brutal crackdown in which at least 30 people were killed and thousands were arrested, tortured, and imprisoned.

So far, the ongoing protests have not reached the size of the 2009 Green Movement demonstrations, when millions of Iranians took to the streets in protest. Twelve people have been killed in demonstrations, with 10 of the deaths inflicted amid intensifying clashes on Sunday night.

Some of the early protests in Mashhad reportedly were organized by ultra-hard-line regime supporters opposed to Rouhani, and may have been designed to undermine his authority.

Unemployment remains high at more than 12 percent, and inflation has resurged to 10 percent. A recent increase in egg and poultry prices by as much as 40 percent, which a government spokesman blamed on a cull over avian-flu fears, appears to have been the spark for the economic protests.

Hundreds of students and others joined a new economic protest at Tehran University, a hotbed of prior student protests against the regime. Iranian students historically have played a leading role in several revolutionary movements, including the 1979 Islamic Revolution.

The tense situation at Tehran University will be a litmus test for the strength of the protest movement and of the regime’s ability to contain, suffocate, or crush the protests.

The Revolutionary Guards, which crushed protests in 2009 and take the lead in exporting Iran’s Islamic revolution and terrorism, remain a strong repressive force that is likely to crush the student rebellion if the local police prove to be inadequate.

Trump tweeted out his support for the protests Saturday morning:

Many reports of peaceful protests by Iranian citizens fed up with regime’s corruption & its squandering of the nation’s wealth to fund terrorism abroad. Iranian govt should respect their people’s rights, including right to express themselves. The world is watching! #IranProtests

Trump is right that simmering resentment over the costs of Iran’s aggressive foreign policy have led protesters to call for more spending at home and less on support of radical groups abroad.

Some of the new protests have specifically denounced the regime’s extensive corruption and its costly involvement in regional conflicts, such as those in Syria and Iraq.

In Mashhad, some chanted, “Not Gaza, not Lebanon, my life for Iran,” a reference to what protesters say is the regime’s focus on exporting the revolution, rather than responding to domestic needs.

They also denounced Iran’s theocratic leaders: “The people are begging; the clerics act like God.”

Washington must continue to drive up the long-term political, economic, and military costs of Iran’s military interventions in Syria, Iraq, and Yemen. It should underscore that the regime’s economic mismanagement, corruption, and support for terrorism and Islamic revolution, which provoked sanctions, have exacerbated Iran’s economic problems.

U.S. policy should also highlight and denounce the regime’s repression and human rights abuses. But the protests might soon be quelled, dissolve into competing camps led by rival leaders, or be hijacked by hostile anti-Western forces, as many of the Arab Spring revolts were hijacked.

Washington should support the right of Iranians to challenge the heavy-handed repression and corruption of a tyrannical regime, but it should hold off on endorsing specific opposition leaders or movements until their character and goals are assessed.

Until then, the Trump administration should do its best to publicize and promote the legitimate political and economic grievances of frustrated Iranians and support their efforts to recover freedom from an Islamist dictatorship that depends on thugs to suppress its own people.