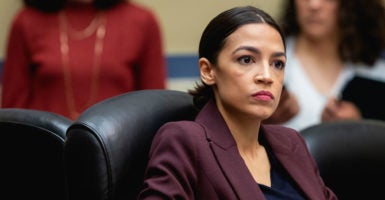 “The real question we should be asking: Why does the Senate GOP refuse to hold any major hearings on climate change?” Rep. Alexandria Ocasio-Cortez, D-N.Y., says. (Photo: Cheriss May/NurPhoto/Getty Images)

Democratic New York Rep. Alexandria Ocasio-Cortez claimed on Tuesday not a single Senate Democrat voted in favor of the Green New Deal because she asked them to vote “present.”

“Because I encouraged them to vote present, along w/ others,” Ocasio-Cortez responded when Republican Wyoming Sen. John Barrasso asked her why Democrats ducked going on the Senate record in support of her radical anti-climate change resolution.

Because I encouraged them to vote present, along w/ others.

McConnell tried to rush the #GreenNewDeal straight to the floor without a hearing.

The real question we should be asking: Why does the Senate GOP refuse to hold any major hearings on climate change? https://t.co/de8oKOXeJf

“[Senate Majority Leader Mitch] McConnell tried to rush the #GreenNewDeal straight to the floor without a hearing,” she continued. “The real question we should be asking: Why does the Senate GOP refuse to hold any major hearings on climate change?”

Ocasio-Cortez also attacked Republicans on Saturday for bringing her proposal to the Senate floor for a vote.

“The GOP’s whole game of wasting votes in Congress to target others ‘on the record,’ for leg they have no intent to pass, is a disgrace,” Ocasio-Cortez tweeted at the time. “Stop wasting the American peoples’ time + learn to govern. Our jobs aren’t for campaigning, & that’s exactly what these bluff-votes are for.”

Prior to the vote, McConnell expressed his pleasure for the impending Senate vote, calling it a “radical, top-down, socialist makeover of the entire U.S. economy.”

McConnell’s campaign account responded to Ocasio-Cortez on twitter saying, “im not owned! im not owned!!” with a photograph of her face morphing into a corncob.