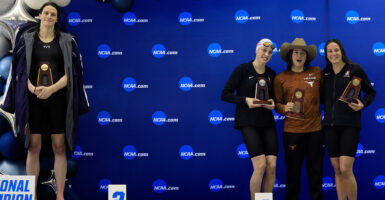 Concerned Women for America filed a formal civil rights complaint against the University of Pennsylvania on Thursday, contending the school is violating Title IX requirements designed to protect the rights of female student athletes.

The complaint came the same day transgender University of Pennsylvania swimmer Lia Thomas, a biological male, won the 500-yard freestyle at the NCAA’s Division 1 Women’s Swimming and Diving Championships in Atlanta. Thomas is set to compete in the 100-yard and 200-yard freestyles today and tomorrow.

Thomas, who had previously competed on the men’s team, has been dominating women’s competitions and shattering records since switching to the women’s team in 2020.

“The future of women’s sports is at risk, and the equal rights of female athletes are being infringed,” said Penny Nance, CEO and president of Concerned Women for America. “Any school that defies federal civil rights law by denying women equal opportunities in athletic programs, forcing women to compete against athletes who are biologically male, must be held accountable.”

“The case of Lia (formerly Will) Thomas at the University of Pennsylvania is a highly visible example of how gender ideology is already wreaking havoc in our schools,” Richards said. “And it’s clearly a violation of the spirit and letter of Title IX. I just hope that courts have the courage to recognize that. If justice is to be served, then CWA should prevail.”