Ocasio-Cortez: Some People ‘Have No Choice but to Riot’ 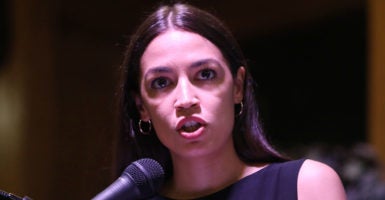 “Social destabilization is what happens when people do not have a plan or feel like there’s no vision for their future,” Rep. Alexandria Ocasio-Cortez, D-N.Y., says. (Photo: Spencer Platt/Getty Images)

Rep. Alexandria Ocasio-Cortez, D-N.Y., said in an interview that marginalized communities in the U.S. and across the globe “have no choice but to riot” under certain conditions.

“And it doesn’t even have to be that way,” she added.

Ocasio-Cortez was discussing Israel and Palestine when she made the remarks, but included poor communities in the U.S. and across the world.

“I’m not even talking about Palestinians,” Ocasio-Cortez said about halfway through her almost hourlong interview, which The Hill flagged.

She noted riots in 1968 that occurred in numerous U.S. cities in the wake of civil rights activist Martin Luther King Jr.’s assassination.

“Social destabilization is what happens when people do not have a plan or feel like there’s no vision for their future,” Ocasio-Cortez said.

Ocasio-Cortez did not address other riots that have transpired in U.S. cities, such as riots in Baltimore in 2015 in the aftermath of the death of drug dealer Freddie Gray.

Gray died after suffering injuries while riding in the back of a police van following his arrest. Baltimore’s prosecutor charged six police officers with manslaughter and other charges, but they were ultimately acquitted due to lack of evidence that they caused Gray’s death.

President Barack Obama addressed the riots at the time, saying that riots occur when “you have impoverished communities that have been stripped away of opportunities, where children are born into abject poverty.”

Obama was not entirely sympathetic to the Baltimore rioters, lamenting the “criminals and thugs who tore up the place.”