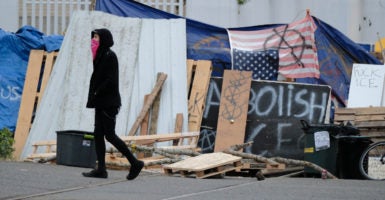 A Portland nonprofit food cart was shut down after the owners faced alleged harassment from Occupy ICE protesters Friday.

The Happy Camper Food Cart, founded by Scott and Julie Hakes in 2017, raised funds to help the homeless through the project Operation Off The Grid. The stand was across the street from the Portland Immigration and Customs Enforcement building, where protesters have held demonstrations since June.

“Unfortunately over the last month, we have been threatened and verbally attacked for not backing the immigration agenda at the DHS location and wanting to stay neutral and serve all who are hungry,” said a Happy Camper Food Cart Facebook post on July 20.

It started when one of the protesters yelled at his daughter with a mega-horn because they thought the daughter was making fun of them. The daughter is overheard saying, “Do you hear them? They think I am laughing at them,” in video footage provided to KATU2 by Scott Hakes.

“They’re constantly cussing at her and screaming at her,” Hakes told KATU2. “She finally had enough. She called me up on the phone, crying. I said, ‘Breanna, shut the doors, we’re done.’”

The protesters threatened to burn down the cart “at least three times,” Hakes told Fox 12 on Sunday. Harassment toward the customers also got so bad that business went down by 80 percent.

“We no longer feel secure operating in the south waterfront neighborhood at this time especially after several calls to the PD in regards to harassment towards our customers, property vandalism and intimidation tactics used to stop anyone from wanting to return,” the Facebook post said. “We did not receive one visit from PD to write a report or to help with these matters. So, we have no choice but to move forward with other ideas for future funding for the organization.”

A Portland Police spokesperson confirmed that there was at least one report of the threats, along with video, according to KATU2.

Antonio Zamora, co-founder of Occupy ICE PDX, told KATU2 the organization does not stand for harassment and goes against the code of conduct.

The owners are selling the food cart for $29,999, less than what was put toward the cart.

The couple knew they wanted to help the homeless after facing homelessness themselves, according to the Operation Off The Grid website. They will still try to raise funds for their nonprofit through other means, according to KATU2.