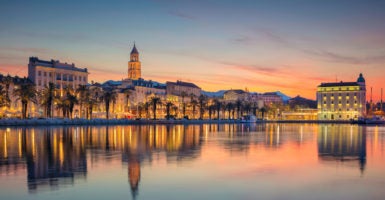 Croatia is the only European Union nation that does not have a double taxation treaty with the U.S. (Photo: RudyBalasko/Getty Images)

Croatia is a strategic security and economic partner of the United States in the Balkan region, but the effectiveness of that partnership is limited by the fact that Croatia is the only European Union nation that does not have a double taxation treaty with the U.S.

Double taxation treaties are international agreements whose chief purpose is to curtail or prevent double taxation of income earned by residents of each country from sources within the other country.

The absence of such a tax treaty is costly, as it adversely affects U.S. citizens working in Croatia and vice versa, owing not only to being double-taxed, but also having to contend with the various administrative requirements in filing tax documentation in both countries.

Croatia joined NATO in 2009 and the EU in 2013, and has been a member of the United States’ State Partnership Program since 1996. The State Partnership Program supports U.S. national interests and security cooperation goals by engaging Croatian partners via military, sociopolitical, and economic conduits at the local, state, and national level. To date, Minnesota and Croatia have participated in more than 100 bilateral military and civilian engagements.

In addition to contributing to NATO missions and the U.S.-led coalition to counter the Islamic State, Croatia has emerged as a regional energy player. All of these endeavors would be enhanced by a double taxation treaty.

Currently, the U.S. has such treaties with 66 countries, including Russia, China, and Venezuela, but Croatia is not one of them. Despite repeated attempts by Croatia to initiate the negotiating process for signing a tax treaty with the U.S., no such pact between the two allies is currently in place.

Entrepreneurial dynamism and greater U.S. investment—which require Croatia’s commitment to policy reforms that will advance its economic freedom—are the keys to ensuring the country’s prosperity. Facilitating such progress, where pragmatically possible, should be a centerpiece of U.S. engagement.

While the U.S. remains Croatia’s most important ally outside the EU, Russia and China are seeking to expand inroads there. Chinese and Russian investments in Croatia are far below those in neighboring western Balkan nations, but are not insubstantial.

A double taxation treaty with the U.S. would be a good sign of the continuing value to Croatia of its integration with the West.

Croatian President Kolinda Grabar-Kitarovic spoke to President Donald Trump about the tax treaty issue during the recent NATO summit, “underscoring the need for a double taxation agreement between the U.S. and Croatia, which would lead to greater investment and trade between the two countries.”

Given Croatia’s willingness to move forward, now would be a good time for the U.S. Treasury to take a good look at concluding a double-taxation treaty with Zagreb.