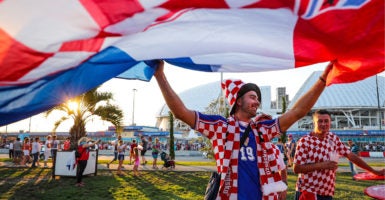 Croatia wasn’t quite able to pull off the World Cup final against France last weekend. Congress should give it a win by admitting it to the Visa Waiver Program.

Member countries tighten airport security and give the U.S. intelligence on terrorists, serious criminals, and lost or stolen passports. This valuable intelligence makes American screening databases much more effective at flagging threats before they can harm the homeland.

In exchange, America lets member countries’ citizens travel to the U.S. for up to 90 days without having to go to a consulate and get a visa interview. Americans also get to travel to participating countries without a visa. That’s a win-win.

And to be clear, those using the Visa Waiver Program are still vetted through the same systems as the traditional visa process. There is no waiving of security requirements.

Membership requirements include secure, machine-readable biometric e-passports for members’ citizens, no apparent threat to U.S. law enforcement or national security, and a visa refusal rate no higher than 3 percent.

Despite wanting to join, Croatia is not one of the 38 countries in the program. Its 5.1 percent visa refusal rate keeps Croatia outside the program. The refusal rate is the number of visas refused from a given country by various U.S. consular officers. Unfortunately, refusal is subjective and differs from post to post.

Additionally, the Visa Waiver Program has not always mandated 3 percent or less. In 2008, countries with rates as high as 10 percent got in on a waiver before the bar tightened up. The fact that these countries remain in the program without concern just shows that the visa refusal rate is not a good metric for program suitability.

Since the U.S. ultimately worries about members’ immigration risk, the Visa Waiver Program should use the visa overstay rate instead. The overstay rate objectively measures how many of their citizens did not leave the U.S. when they were supposed to. Under this metric, Croatia’s 0.89 percent overstay rate beats many other member countries’ rates. Poland’s, at 1.58 percent, does also.

To be clear, policymakers need not totally scrap the requirement for a competitive refusal rate. They should instead reinstate the waiver for refusal rates up to 10 percent and shift the onus to low overstay rates.

In addition to maintaining a competitively small overstay rate, Croatia has also made consistent good faith efforts. In 1997, Croatia provided Americans with visa-free travel. Since 2007, it has issued biometric e-passports to its citizens. In 2008 and 2011, it signed and ratified memoranda of understanding to meet U.S. intelligence-sharing requirements.

Croatia is a worthy candidate for the Visa Waiver Program program. Congress should follow France’s example on this one and play ball.