Most World Powers Last 250 Years. Is ‘America’s Expiration Date’ Near? 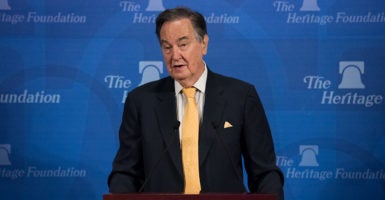 If there were a chance that America’s values and prestige would collapse around the Fourth of July in 2026, what would that change about the way Americans interact?

That’s the question author and syndicated columnist Cal Thomas posed to his audience in a recent presentation, “America’s Expiration Date,” at The Heritage Foundation.

Thomas based his Feb. 6 speech on his new book of the same name, which examines eight of the greatest empires in world history and how they tended to spiral into decline after about 250 years in power.

By that metric, America could begin a theoretical decline by about 2026, predicated on the country’s founding on July 4, 1776.

“While many like to comfort themselves that America is different, or even uniquely blessed by God, there’s no proof that we will escape the fate of other nations that one time believed the same about themselves,” Thomas said.

Thomas, 77, has authored 10 books on religion and public policy and has written his popular syndicated column since 1984. (The Daily Signal carries it.)

After examining the historical precedent of former global superpowers, such as the Roman, Persian, Ottoman, and British empires, Thomas claims in his book that certain markers of cultural decline precede political decline. The book’s subtitle is “The Fall of Empires and Superpowers and the Future of the United States.”

“Our past challenges were met with a resolve born out of a shared ethic and moral sense that is today in rapid retreat,” Thomas said.

One of the most disturbing of those markers, Thomas said, is the casual devaluation of human life. He cited not only the large number of abortions that take place every day in the United States, but also the daily deadly shootings in the inner cities.

“In Chicago and Baltimore and other cities, shootings have become so common that they hardly make the news anymore,” he said. “More laws cannot stem this murderous tide. How can they, when the moral law has been abandoned?”

Despite the warnings that America is edging toward decline, Thomas is still hopeful that there’s time to reverse the damage and ensure that July Fourth, 2026, is a celebration of the 250th birthday of the country, not a funeral.

Thomas, who was vice president of the Christian political activist group Moral Majority in the 1980s, outlined three steps for restoring a common morality.

The first is to focus on forming the next generation, especially by removing them from public schools and liberal institutions of higher education.

“We don’t send our soldiers to train in the enemy’s camp, so why do we send our children to schools that teach them values so contrary to our own while expecting them to return home with those values and beliefs still intact?” he asked.

The second reform, he said, would be to encourage people to look at government welfare programs “as a last resource, not a first resource,” especially by encouraging saving.

Finally, Thomas urged people to talk to their friends and neighbors about important issues in order to close the partisan gaps in public discourse and to combat the power of the left-leaning mainstream media. He also suggested asking them to read good conservative media and to listen to Rush Limbaugh’s talk-radio show.

He closed his presentation with an ominous warning.

“On July Fourth, 2026, the U.S. will be 250 years old. That is the average life span of great nations,” Thomas said. “I’m not saying the end is near, but what is going to prevent it if we don’t turn things around?”