What the Left Gets Wrong About Stock Buybacks 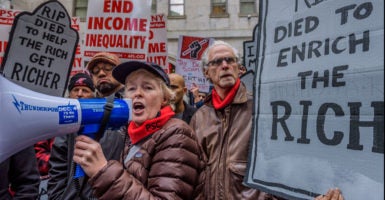 If you look around, the economy is growing faster than most economists predicted just last year.

Layoffs are rare and employers are hiring. New claims for unemployment benefits are close to a 48-year low, and unemployment is at an 18-year low. If you haven’t noticed, “help wanted” signs seem to be going up all over the place.

Tax reform, which passed last year, has only contributed positively to these economic trends. Those who want to detract from the successes of the 2017 Tax Cuts and Jobs Act look for stories like a recent Harley-Davidson plant closing and large stock buybacks.

Even a historically strong economy hasn’t been able to rescue the motorcycle company from four years of declining sales.

Despite all the good news, some keep hammering corporate stock buybacks as evidence that the tax cuts aren’t working. So, let’s look at the reality of stock buybacks.

When businesses don’t have suitable investment options for all their profits, they give part of them back to their investors so that those individuals can instead reinvest in other, more profitable endeavors.

Harley-Davidson is a prescient example of stock buybacks. By transferring just shy of $700 million back to shareholders, those investors are now able to redirect that money to other investments that have a more promising future.

Those new investments will also need workers to build, design, and manufacture whatever the future demands.

If instead, Harley-Davidson poured more money into a U.S. market that did not want to buy its bikes, the investment would still not sustain long-term jobs. Instead, it would just prolong the company’s decline and ultimately everyone—including the employees—would be worse off.

The former director of the Congressional Budget Office, Doug Holtz-Eakin, summed up the economics of stock buybacks. “Stock buybacks do not make shareholders richer,” he said. “A stock buyback is simply the exchange of valuable stock for the same value in cash.”

The 2017 tax reform lowered the corporate tax rate from 35 percent to 21 percent. The lower tax rate makes investing in the U.S. more attractive. The tax law also further lowers the cost of business investments through expensing.

In the first quarter of 2018, investment increased by more than 21 percent among companies in the Standard & Poor’s 500 stock index, compared with the same quarter in 2017.

Investment is often slow in the first quarter of the year, so most observers predict strong business investment will continue.

More business investment in new buildings and equipment means that Americans will be more productive, revenues will increase, and businesses will want to hire more workers and will pay higher wages to find good talent.

“In a dynamic, competitive economy, the relationship between companies and their employees is symbiotic, not antagonistic,” explains Kevin Hassett, chairman of the Council of Economic Advisers. That is exactly what we are seeing.

The popular narrative that only the rich benefit when the stock market and businesses are doing well is based on a mistaken view of stock ownership that may have been true in the 19th century, but certainly isn’t true today.

When businesses increase in value or pay dividends, shareholders—the owners of those businesses—share in the benefits.

In the U.S., shareholders are ordinary people, with more than half of all families owning stock, directly or indirectly. You likely own pieces of businesses in your private retirement savings account, through your company’s pension fund, and your kids’ college savings accounts.

The rate of stock ownership is increasing, with some of the biggest gains coming from lower-income households. The value of asset holdings in investment accounts has also risen for low-income Americans, compared with those with higher incomes.

The notion that only the wealthy benefit when businesses return profits to their investors is simply wrong.