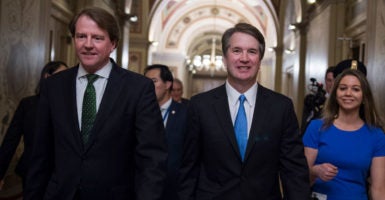 The process for appointing all federal judges is the same, and it includes three steps: the president nominates, the Senate Judiciary Committee holds a hearing, and the full Senate votes.

President Donald Trump has taken the first step in this process by nominating Judge Brett Kavanaugh to succeed retiring Supreme Court Justice Anthony Kennedy. The ball is now in the Senate’s court.

There is no reason why Kavanaugh’s confirmation process can’t follow this traditional pattern.

The purpose of the confirmation process is to evaluate a nominee’s qualifications for the position to which he or she has been nominated. Since any hiring process requires a good job description, the first step is to establish those qualifications.

But the more important qualification for judicial service is Kavanaugh’s judicial philosophy. That’s a fancy label for how he will approach each of the cases that come before the court.

Judicial philosophy comes in two basic varieties. Here, too, the senator from Utah can be helpful. He has described two kinds of judges: impartial and political. An impartial judge takes his own views, preferences, or agenda out of the equation as much as he possibly can. He takes the Constitution or statutes as they are written and applies them fairly to the facts of each case. He lets the law decide which party wins and which party loses.

A political judge relies on his own views, preferences, or agenda and uses them to manipulate the meaning of the Constitution and statutes. The political judge, rather than the law, decides which party wins and which party loses. He picks winners and losers based on how they serve political interests.

The most important question for the Senate is whether Kavanaugh will be an impartial or a political Supreme Court justice. The answer to that question is in his record.

Every nominee has a record, and it includes both personal and professional information. Kavanaugh’s professional record falls into three categories: his service in the executive branch, in private practice, and as a judge. The key is finding the material that is most relevant to answering the question of whether he will be an impartial or a political justice.

The best way to determine the kind of Supreme Court justice Kavanaugh will be is to evaluate the kind of appeals court judge he has been, and what he has said and written specifically about judging and deciding cases. In other words, the most important documents to assess will be his majority and separate opinions since he became a judge on the U.S. Court of Appeals in May 2006, and his specific speeches and articles.

This is where the Senate should focus its attention in the weeks ahead.