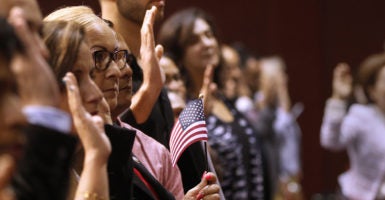 In response to what he calls “noise surrounding illegal immigration,” Sen. James Lankford, R-Okla., added his own voice to the subject by releasing a video Friday celebrating those who legally entered the United States and became citizens.

“This afternoon, if you wanted to apply for any job in the country, you can,” Lankford says in the video, speaking in an Oklahoma City courtroom filled with new citizens waving miniature American flags. “You’re an American. … Be the American that you’ve always said Americans are, and enjoy living the American dream with us.”

The 2-minute video was shot at a citizenship ceremony the previous Friday.

Released on the Oklahoma Republican’s website and social media pages, the video follows the senator as he welcomes a new group of citizens. It’s a ceremony Lankford has enjoyed attending for years, his communications director, Darrell “D.J.” Jordan, told The Daily Signal.

In the video, Lankford notes that between 700,000 and 750,000 become new citizens each year, with a total of 7.4 million completing the naturalization process over the past decade, according to U.S. Citizenship and Immigration Services and the American Immigration Council.

“Senator Lankford hopes this video will bring more national attention to the Americans who worked hard and followed the legal process to earn the right to become an American citizen,” Jordan said. “Senator Lankford also hopes it sends a message internationally that America welcomes people who want to follow the rules and come to contribute to our society.”

The video comes less than 48 hours after Lankford proposed legislation with his fellow Oklahoma Republican, Sen. Jim Inhofe, that seeks to keep together families who cross into the country illegally. The bill also attempts to ensure that children who cross the border illegally are healthy and not endangered by a family member.

Hans von Spakovsky, a first-generation American who is a senior legal fellow at The Heritage Foundation, said Lankford’s bill provides a way to override a “foolish settlement” made in the 1990s by the Clinton administration.

That legal settlement, von Spakovsky said in an email to The Daily Signal, “forces the government to separate alien children from their parents who are detained” by federal immigration officials.

David Inserra, a policy analyst in immigration and homeland security for The Heritage Foundation,  said legal immigration is a more complicated issue than it appears.

“Legal immigration is something the U.S. values and that conservatives believe in,” Inserra said in an interview. “Crossing the border illegally is not the way to come to the U.S., nor is it the right way to claim asylum. For those with valid claims, they should go to legal ports of entry to make those claims.”

“But, crossing the border illegally is a crime,” he said. “The U.S. should deter illegal border crossing. The U.S. can and does provide asylum for people who are victims of persecution, but our laws must be respected.”