Who’s Responsible for Separating Alien Kids From Their Parents? Many People, but Not Trump 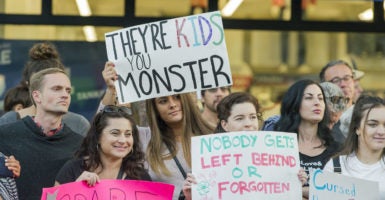 Who truly is responsible for the 2,000 alien kids who, according to the Associated Press, recently have been separated from their detained illegal alien parents?

There is a lot of blame to share. That includes President Bill Clinton and the alien parents themselves, as well as the courts and immigration policies foolishly created by the Obama administration. The perverse incentives in those policies have endangered the lives and safety of children and helped fund the deadly Mexican drug cartels that run the trafficking networks on our southern border.

You would not know that based on the absurdly biased coverage and virulent protests that have occurred. The Trump administration is simply doing what it is constitutionally charged with doing—enforcing the law.

The president on Wednesday issued an executive order that directs the Department of Homeland Security to keep illegal alien families together “to the extent permitted by law.” That is the crux of the administration’s problem: the extent to which the government is permitted to keep families together while they await removal proceedings.

In 1997, the Clinton administration entered into a settlement agreement in Flores v. Reno, a lawsuit filed in federal court in California by pro-illegal immigration advocacy groups challenging the detention of juvenile aliens taken into custody by the Immigration and Naturalization Service.

The Clinton administration agreed to settle this litigation despite the fact the Supreme Court had upheld the Immigration and Naturalization Service regulation that provided for the release of minors only to their parents, close relatives, or legal guardians.

According to the Department of Homeland Security, the Flores agreement allows the agency to detain unaccompanied minors for only “20 days before releasing them to the Department of Health and Human Services which places the minors in foster or shelter situations until they locate a sponsor.”

But in a controversial decision, the U.S. Court of Appeals for the 9th Circuit, the most liberal in the country, has interpreted the settlement agreement to apply to “both minors who are accompanied and unaccompanied by their parents.”

In other words, it is the 9th Circuit’s misinterpretation of the Clinton administration’s settlement agreement that doesn’t allow juvenile aliens to stay with their parents who have been detained for unlawful entry into the country.

Of course, if those parents would simply agree to return to their home countries, they would be immediately reunited with their children. So those who come here illegally are themselves to blame for their children being assigned to foster care or to another family member or sponsor who may be in the country.

The executive order signed by President Donald Trump directs the attorney general to file a request with the federal court in the Flores case to modify the settlement agreement to allow the government “to detain alien families together throughout the pendency of criminal proceedings for improper entry or any removal or other immigration proceedings.”

Of course, the administration’s critics know about this settlement and know it limits the ability of the administration to keep alien families together. The point of their propaganda war is to force the Trump administration to terminate its zero-tolerance policy of prosecuting all adult aliens for illegal entry, stop all detentions, and return to the “catch and release” policies of the prior administration.

The executive order did not indicate the president was in any way relaxing the zero-tolerance policy. Unfortunately, an unconfirmed news report the day after the executive order was signed cited a “senior U.S. Customs and Border Protection official” as claiming the Department of Homeland Security was “suspending prosecutions of adults who are members of family units until ICE can accelerate resource capability to allow us to maintain custody.”

If this is accurate, then many illegal aliens currently in detention will be released because of a lack of adequate family detention centers.

“Catch and release” was the policy of giving illegal aliens a court date and then releasing them, a practice which enables many of them to disappear into the vast interior of this country. Such a policy is not a viable option.

As Mark Metcalf, former immigration judge, points out, for example, after 9/11 the number of aliens who failed to show up for their immigration hearings reached 58 percent in 2005 and 2006. Over the past two decades, 37 percent of all illegal aliens released pending an immigration hearing fled and never showed up for trial.

The Obama administration provided a huge incentive for illegal aliens to smuggle children across the border, since a child acted as a get-out-of-jail-free card for avoiding detention and prosecution for the adult accompanying the child. As the Department of Homeland Security correctly says, this policy “incited smugglers to place children into the hands of adult strangers so they can pose as families and be released from immigration custody after crossing the border, creating another safety issue for these children.”

In 2013, a federal judge issued a searing indictment of the Obama administration’s policy of reuniting children with their illegal alien parents in the U.S. who had paid human traffickers to smuggle the children into the U.S. and taking no action against the parents.

As Judge Andrew Hanen said in a case against a human trafficker who was caught with a 10-year-old girl, the administration’s policy was to complete “the criminal mission of individuals who are violating the border security of the United States.” He called the policy “dangerous and unconscionable” because it encourages illegal aliens to place their “minor children in perilous situations subject to the whims of evil individuals.”

Hanen listed the crimes he had seen committed against illegal aliens by traffickers, including assault, rape, kidnapping, and murder, and catalogued the “violence, extortion, forced labor, sexual assault, or prostitution” to which the aliens were subjected. Funds paid to these human traffickers by illegal aliens directly fund dangerous drug cartels such as Mexico’s Los Zetas.

Another reason for the current separation problem is illegal aliens trying to take advantage of our generous asylum law. If an alien follows the law by presenting himself at a port of entry with his family and claiming asylum, then his claim will be reviewed and his family will stay together.

It is when aliens are caught illegally crossing the border and then claim asylum that they have put themselves into the situation of being prosecuted for illegal entry. They are then separated from their children because of the Clinton-era settlement.

Something else to keep in mind when it comes to the credibility—or lack of credibility—of many asylum claims these days is that many aliens pass through countries with their own asylum laws on their way here—including Mexico. If an alien doesn’t claim asylum before he gets to the U.S., that is a pretty good sign his reason for coming to the U.S. is more about economics than asylum.

This issue of alien children being separated from their parents who are being prosecuted for illegal entry also should be kept in perspective. Our justice system doesn’t refuse to arrest, prosecute, and jail citizens when they break the law because they happen to have children.

As Peter Kirsanow, a commissioner on the U.S. Commission on Civil Rights, points out, a report from the Department of Health and Human Services shows that more than 20,000 children were placed in foster care in 2016 because of “Parent Incarceration.”

None of those protesting against the Trump administration seem concerned that 10 times more American children than the 2,000 alien children cited in the Associated Press report were separated from their parents in 2016 because of violations of the law by their parents.

As Kirsanow says, it is “regrettable” children are separated from their parents. But “people who cross the border illegally have committed a crime, and one of the consequences of being arrested and detained is, unfortunately, that their children cannot stay with them.”

It is not Trump who is responsible for this.