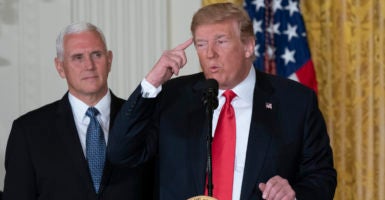 A new Labor Department regulation finalized Tuesday—which will make it easier for small businesses to pool resources to negotiate with large employers—will expand health care coverage for 4 million Americans by 2023, according to the nonpartisan Congressional Budget Office.

Out of that 4 million—who were previously required to buy on the individual market through Obamacare exchanges—400,000 do not have insurance, according to a May 23 CBO report.

Further, under “association health plans,” premiums are estimated to decrease between $1,900 and $4,100 per year, a senior Department of Labor official told The Daily Signal during a background briefing with two reporters Monday.

President Donald Trump signed an executive order last October to put the process in motion, and the Labor Department put the proposed regulation in the Federal Register in January and has gone through the public comment period.

The rule is finalized on the day Trump is set to speak to the National Federation of Independent Business, the nation’s largest advocacy group for small businesses.

Currently, 8 million Americans employed by small businesses and another 3 million sole proprietors, who do business without employees, don’t have access to a group health insurance plan. Solo proprietors are currently required to buy health plans on the individual market. Now, they can band resources with other small businesses with 50 or fewer employees to buy association health plans.

Association members must have a “commonality,” which could be based on region or industry, senior administration officials said on background. Potential examples would be an industry organization, such as the National Restaurant Association, or statewide Chamber of Commerce or other regional business organization allow employers to band together to negotiate for large insurance plans.

The “association health plans, combined with a separate rule not yet finalized that will allow people to buy short-term insurance plans,” will reduce the federal deficit by $1 billion, according to the CBO report on May 23.

Association health plans will have three phases, the first completed on Sept. 1, the second on Jan. 1, and the final on April 1, a senior Department of Labor official said.

Critics of the plan contend it will water down regulation and weaken the existing Obamacare exchanges. America’s Health Insurance Plans, the health insurance lobby, has warned that such plans could be prone to fraud without state oversight.

However, Labor Department officials contend this increases competition and choices.

“The main objective of this effort is to expand choices for people who do not yet have insurance and [create] more options for employers and employees to take advantage of,” Robert Moffit, a senior fellow in health policy studies at The Heritage Foundation and a former assistant secretary at the Department of Health and Human Services, told The Daily Signal in January when the regulation was first submitted to the Federal Register.

One of the many critiques of Obamacare was that it did not allow people to buy insurance plans across state lines, and further has left many coverage areas with a single option.

While association plans are targeted for small businesses, a larger corporation could join one. However, these companies already have existing plans, so there would be less incentive to do so.