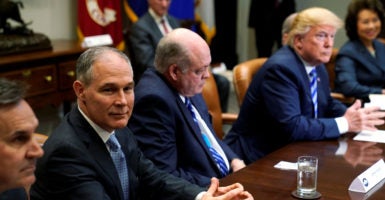 The process of undoing the Waters of the United States rule came closer to completion following the Environmental Protection Agency’s announcement that it was sending the White House a scaled-back version.

The Waters of the Untied States, one of former President Barack Obama’s signature environmental achievements, was immediately met with controversy when it was enacted in 2015. Critics cited ambiguity in the rule that opened the door for federal government overreach, among other issues. EPA Administrator Scott Pruitt—the attorney general of Oklahoma at the time—led a multi-state lawsuit against the sweeping water rule.

The fate of WOTUS was quickly considered for reform with the entrance of the Trump administration. President Donald Trump signed an executive order in February 2017 calling for review of the regulation. Pruitt announced he was working on repeal in June of that same year.

As a birthday gift to Trump, Pruitt announced Thursday he was sending the White House a “more reasonable” WOTUS rule.

In keeping w/ @POTUS’s promise, we have stopped the 2015 #WOTUS rule & I just announced to folks in Lincoln that a much more reasonable #WOTUS rule will be sent to OMB tomorrow. Time to provide farmers & ranchers nationwide w/ regulatory certainty!

The EPA and the Department of the Army on Friday sent a legal proposal to the Office of Management and Budget, revising the definition of WOTUS. The move is part of the two-step process the EPA and Army are conducting as they consider reforms.

“Farmers, ranchers, landowners, and other stakeholders are counting on EPA to listen to their input when it comes to defining ‘waters of the United States,’” Pruitt stated in a press release. “Today, we are taking an important step toward issuing a new WOTUS definition and answering President Trump’s call to ensure that our waters are kept free from pollution, while promoting economic growth, minimizing regulatory uncertainty, and showing due regard for the roles of the federal government and the states under the statutory framework of the Clean Water Act.”

WOTUS is one of many Obama-era environmental regulations the Trump administration has rolled back or done away with completely.