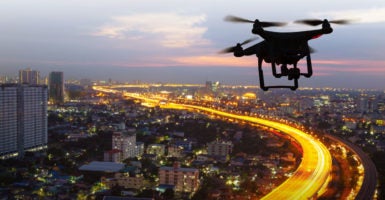 At a hearing on June 6 to address legal authority to stop dangerous drones, Sen. Ron Johnson, R-Wis., asked, “Is this really all we’re doing?”

The Prevent Emerging Threats Act of 2018, which Johnson introduced, was being debated by the panel he heads—the Senate Homeland Security and Governmental Affairs Committee. He was asking if the legislation would do enough to allow authorities to counter emerging threats from drones.

This would be an important development, as authorities are grappling with how to counter hostile drones amid the rapid growth and spread of drone technologies.

The bill also picks a wise starting point, because both of those departments have many missions and facilities that require authorities to counter potentially hostile unmanned aircraft systems. Among many examples, Homeland Security protects the border, and the Justice Department guards prisons.

But Johnson is right to be worried whether the committee’s bill goes far enough, because state and local authorities are being left out of it.

The legislation confers new authority on federal law enforcement, but it fails to give state and local governments any similar powers. Instead, the bill would only allow local law enforcement to request federal help to take down hostile drones, which the feds may not always be in a position to do.

Federal authorities do not have the resources to respond to every threat across all 50 states, but state and local authorities do. As Congress looks for ways to combat the malicious use of drones, it should consider granting that power to states.

Congress should model its approach on the Department of Homeland Security’s 287(g) program, in which immigration officials train and deputize local officers to enforce federal laws under federal authority.

To participate in the program, local authorities must sign a memorandum that describes the limits of delegated authority and undergo both initial training and refresher training every two years. State and local law enforcement could form similar working partnerships with the department when it comes to counterdrone authority.

Such a pilot program would give officials the flexibility to grapple with the ever-shifting technological situation on a local level, such as at state fairs and college ball games. It would simultaneously meet the need for federal oversight of new counterdrone technologies to ensure they are used appropriately and do not result in collateral damage.

A pilot program similar in structure and scope to the 287(g) program would give law enforcement officers in those communities the legal support they need to do their jobs.